Your say: Did Paheli deserve better? 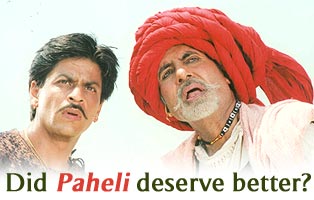 The Oscar Nominations have been announced, and India has not made it.

Brokeback in, Paheli not!

Why Paheli didn't make it

Do you think the fairytale starring Shah Rukh Khan deserved better treatment? Should it have been marketed differently? Did Bollywood support India's official entry as much as it needed to?

Or is this just another case of the Oscars overlooking films it cannot understand?

Should Paheli have got an Oscar nomination? Give us YOUR verdict.