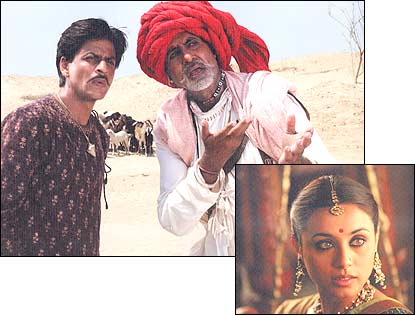 Opinion may be divided on Shah Rukh Khan's moustache, with many loving the superstar's new look and others nixing it, but there is no denying that the upcoming Paheli looks like one of the most colourful films we've seen in a long time.

Shah Rukh looks totally grounded as a Rajasthani villager, Rani Mukerji is simply stunning, while everyone else in the film looks refreshingly different.

Paheli, shot by ace cinematographer Ravi K Chandran, has one of the freshest palettes seen in current cinema.

Watch out for more pictures tomorrow!