s April 14, the Tamil New Year, nears, excitement in film circles is increasing. Though none of the recent films, including the much-awaited Pongal releases, failed to excite the audience (save Vijay's Thirupachi to an extent), people connected with the film industry are hopeful of better times after April 14.

It is not everyday that a Rajnikanth film gets released. No actor in the history of Tamil cinema has had the kind of sway Rajnikanth has on audiences. His last film Baba might have flopped, his political career might not have taken off, the people of Tamil Nadu might not have heeded his call to defeat the PMK candidates, but Rajni still continues to enthrall Tamil cinegoers.

Fazil's 1993 Malayalam film, Manichitrathazhu, was one of the biggest hits of Kerala, and it fascinates people more than a decade later. Aapthamitra, the Kannada film based on Manichitrathazhu with the late Soundarya enacting the role portrayed by Shobhana (for which she won her first National Award) was also a huge hit in Karnataka. So, all the odds are in favour of its Tamil version -- the Rajni-starrer Chandramukhi, an April 14 release -- hitting the jackpot.

The other film that is releasing on the same day is Kamal Haasan's bilingual Mumbai Xpress. There is no history of Kamal's comedies failing at the box-office, and his joining hands with director Singeetam Srinivasa Rao (Pushpak) has made the film even more exciting. 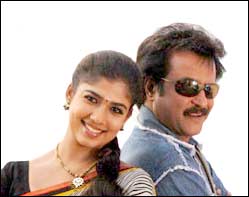 The third major film that is slated for release on April 14 is Vijay's Sachin. Vijay can be described as the uncrowned king of the Tamil box-office. Not a single film of his has bombed at the box office in recent times. He may be following the same formula in film after film but his fans seem to like it. Naturally, Sachin is one of the most eagerly awaited films. The very title of the film, the filmmakers hope, would bring crowds to the theatre with the kind of madness Indians show for cricket.

Vidyasagar, who composed the music for Rajni-starrer Chandramukhi, is currently busy with its background score. He will have an eventful April 14.

"I have four releases on April 14 -- three Malayalam films and, of course, Chandramukhi," he says.

One of the films he is very excited about is the Malayalam film Chandrotsavam by Renjith, which is based on Carnatic music. Another interesting feature about the film is, it has Dakshinamurthy, yesteryear's well known music composer, playing a bagavathar, or Carnatic musician.

Mohanlal plays Srihari, his sishya. It's very rare that Vidyasagar gets to compose tunes based on classical ragas; he has said on several occasions that melody is his forte.

Nedumudi Venu may have won only two National Awards (as supporting actor in His Highness Abdullah and a special jury award for Margam). But he is widely considered as one of the most versatile actors in India.

One of his admirers is Kamal Haasan who makes it a point to talk about Nedumudi's versatility and spontaneity in many of his interviews, and also give Nedumudi meaty roles in his films; Nedumudi otherwise sticks to Malayalam films. Even thespian Sivaji Ganesan was said to be an admirer of Nedumudi Venu's talent. They became close on the sets of the Malayalam film Yatramozhi, which had Sivaji and Mohanlal in the lead roles.

The biggest moment in Nedumudi Venu's career was going to Cannes as the lead actor in the film Arimbara (directed by Murali Nair).

While Mohanlal's silver jubilee in the film industry was a big event in Kerala, Nedumudi's 25 years was a quiet affair.

, a breath of fresh air

directed by Ameer, starring Jeeva as an autist and Saranya as his mother, has bowled over all those who love films with a different story and treatment. Ameer had earlier showed his mettle with a compelling film, Mounam Pesiyathe.

With Ram, he has confirmed that he is a courageous filmmaker who has the ability to swim against the tide. Yuvan Shankar Raja's mesmerising music in Ram is another of its major plus points.

, a Malayalam film directed by Chicago based Ligy J Pulleppally, has won the 2004-2005 Lankesh Chitra Prashasti award. It was chosen from 11 other debut films across the country including Sashi Kumar's Kaya Taran (Hindi), Amu ( English) and Kazcha (Malayalam).

Ligy was born in Kerala and grew up in Chicago. She was a trial lawyer in Chicago and was litigation director of an agency serving the needs of abused women.

The award was given to Ligy on March 8, the 70th birth anniversary of the late P Lankesh who passed away at the age of 65 in 2000. His daughter Kavitha Lankesh instituted the award in his memory.

(The Journey) is the tale of two girls in love.
Poornima
COMMENT
Print this article