Chai Pani Etc begins with a version of Saare jahan se achha. Although the reinterpretation lasts for 30 seconds or so, the nationalistic sentiment lingers throughout the film.

Chai Pani etc is very much about India. For a satirical comedy that portrays corruption, bureaucracy and censorship in India, the film succeeds in being funny and entertaining. However, it fails by creating a world of cinematic idealism.

The story -- set in Delhi (a world director Manu Rewal is most familiar with) and Jaisalmer -- is about Satya's (Zafar Karachiwala) struggle as a young, idealistic, US returned filmmaker. He is back in India to make a documentary on Jaisalmer.

Konkana Sensharma plays a double role -- as Radha, an ambitious fashion designer selected for a top design school in London, and as Shanti, her fashion school classmate who works in an NGO. Satya is attracted to Shanti with their subsequent meetings in Jaisalmer while shooting the documentary.

Between falling in love and making films, Satya struggles against corrupt and hypocritical bureaucrats, aiming to force him to cut images of poor children from his award-winning documentary.

His friend, played by Channel [V] VJ Gaurav Kapur, makes Satya face up to the ways of the world. But Satya continues to face dishonesty in both his personal and professional life. The modern day dilemma on whether to be idealistic or give into the corruption becomes both the crux of the film as well as Satya's character.

Zafar, coming from a theatre background, has acted convincingly as an embattled filmmaker. Gaurav is quite delightful to watch. Other supporting characters overact, which amounts to periodic comic relief.

National Award winner Konkana Sensharma has performed brilliantly. Her double role is particularly fascinating. It is emblematic of the double role India plays in the face of globalisation. The anxiety and negotiation between 'tradition' and 'modernity' seems to be captured well, even if the solution offered is simplistic.

As Radha, Konkana plays a woman studying in London, attracted to Western culture. She is depicted as cigarette-smoking, pub-hopping, two-timing, and overall dismissed as shallow. 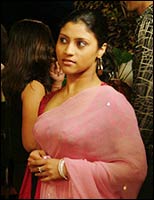 On the other hand, Shanti is more 'Indian' -- she wears ethnic kurtas and cotton saris, works for an NGO, teaches village children, upholds Indian values and, like Satya, strongly believes in nationalism.

Using Satya and Shanti as mouthpieces, who uphold populist nationalistic sentiment and boycott all things Western, the film is rather too simplistic and reductionist. Ironically, the film ends up selling Brand India, the very thing it sets to criticise.

The cultural tour of Jaisalmer, the well-lit fort, the crowded streets, the cultural artefacts in the museum, the ethnic shops selling colourful handmade puppets and the yogic postures are just few instances.

The well taken exotic shots of Jaisalmer are picturesque and colourfully cinematic. The 92-minute film is made in English sporadically sprinkled with Hindi gaalis and phrases, keeping in mind Western audiences and caters to urban Indian English speaking, multiplex movie goers. The formula seems to have worked well as more and more films, ranging from Monsoon Wedding to Let's Party, position themselves as low-budget, Hinglish, and selling 'Indianness.'

Thus, even though Harish (Gaurav) comments on how Indian filmmakers sell their films to the West by adding a little bit of poverty, caste and class and exotica like elephants to depict India, Chai Pani Etc continues to do so in yet another way as it stereotypes Indian bureaucracy and sells Indianness.

The colloquial phrase 'chai pani', implying 'bribes', not only exposes corruption in India but the title also quickly paints a picture of inefficient sarkari babus who take long tea breaks. The film pokes fun at government offices by using familiar images of paan stains on the walls, towering piles of files, bureaucratic paperwork, everyday corruption, and so on.

Taking a fresh look at old problems, the 100 percent sync sound film is a healthy change among run of the mill commercial cinema.

While not remotely close to being a Jaane Bhi Do Yaaron, in an age of sitcoms and canned laughter, Chai Pani Etc deserves applause for being different and for eliciting laughter in the face of grim issues like corruption.