Vinta Nanda is a name that has traumatised housewives for years, agonising them in the closing stages of each episode of her soap, Tara, where, without fail, a character would, in extreme close-up, gasp with shock, and the titles would roll, starting with the director's name.

Now, the fact that her name thudded across the screen to such severe a drum roll, and concluded an evening of over-the-top histrionics should not be something we blame her for, but it's important that she compensate by giving us better stuff to remember her by.

And Hell, she's tried. Referring copiously to the non-conformist Indian New Wave director's handbook, she's ticked off most of the key points -- write the film in English; cast the inevitable Rahul Bose; add generous dashes of profanity; establish an intellectual, 'morally liberated' female character; drench the script in metaphors, throw some cleavage towards the camera, get those Bombay Boys dudes to make a repetitive soundtrack -- It's all there.

What the film doesn't have is anything to say. The metaphors are there, used to inane effect more trite than could have been thought possible.

The film is about Gauri, a scriptwriting drunk, pining for the 'love' she's lost -- her married boss (Aryan Vaid) who starts off the film by firing her, both professionally and in her capacity as mistress. She enjoys great disrepute among the television soap industry, and this earns her catty barbs that are unbelievably free of restraint, and more lecherous bosses.

Karan, we're led to assume -- for he doesn't ever do anything, but can occasionally be seen wearing a headset  is an editor for the television show, and quite bemused by Gauri. It has to be admitted that this is among Rahul's better work, seeing as he is well in-rein of his histrionics throughout the film. Having said that, it is a nothing role, and since virtually anyone could sleepwalk through it, why not India's pop-pseudo posterboy?

Gauri shakes her arms and gasps profoundly, and then, shaking all the angst off her shoulders, makes the world-weary announcement, 'Time is a relative thing, Karan!' 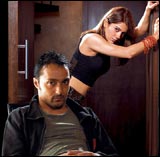 The audience is justifiably thrown into shock by this groundbreaking declaration, snapping on the heels of Rahul Bose yelling to the effect of 'fact and fiction are not the same.' But that isn't all -- Rahul's Karan disagrees with Gauri about the relativity of time, and is treated to a lecture about two men standing at a platform, with A's son leaving and B's son prodigally returning -- memories of math class made much, much worse.

A common screenwriting pitfall is to give your character clearly defined idols to help the audience identify with who they are. This has to be done artfully, and with great caution. For example, Tom Hanks' constant citations of The Godfather in You've Got Mail gave his Joe Fox character a boyish charm that smoothly offset his businessman ruthlessness. Similarly, Philip Seymour Hoffman's love for Iggy Pop in Almost Famous added 'edge' to his rock critic, Lester Bangs. This must be done sensitively, by scriptwriters more than fleetingly familiar with the idol's body of work.

In White Noise, Koel Purie's Gauri espouses Jim Morrison as her lord God, complete with his 'young lion' poster prominently, and repeatedly, seen on her wall, and an obsession with the Lizard King's lyrics. However, things go awry when she paraphrases him constantly, lifting words utterly out of context and -- this is where Doors fans will cry foul and possibly hurl beverage bottles at the screen in fury -- sings Alabama song entirely out of key. Blasphemy.

Gauri emerges like A Fish Called Wanda's Otto (Kevin Kline's Oscar-winning performance) -- quoting (iconic philosopher) Nietzsche cluelessly. And the irony is that she is not, we assume, intended to look like a moron.

All Koel's television writer persona seems to have picked misguidedly up from Jim is a complete love for alcohol. Pathetic. 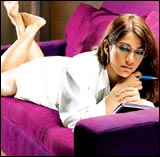 Koel is, frankly, startling. She looks vivacious and interesting in every frame, madly bohemian and disconcertingly attractive at the most unexpected of times. She's dressed with kitschy mismatch quite becoming on her, and she's a good actress. Really. The problem is, she doesn't know -- or isn't told -- when to stop acting. Making up for her co-star's uncharacteristic self-handling, Purie wails, shrieks and hiccups her way to an obnoxious loudness. It's quite a pity -- she has the talent, but desperately needs to learn where the brakes are. The film has a million plot-holes and shortcomings, and one worth dwelling about would be the inflated sense of soap importance in Vinta Nanda's universe. Since when have sensational soap-writer's tabloid lives impacted viewers? Are tabloids even interested? Do any of us, unrelated to Balaji Telefilms, even know one name of a writer churning out the daily drivel? Truly optimistic, Ms Nanda.

Overall, the film has a few passable scenes, and a few making you groan with cliché. But as a meaningless movie, it doesn't have the entertainment value needed to go the distance. Pretention without profundity makes for a trying attempt.

Watching White Noise is like nursing a really drunk date: you're tolerant up to a level, because the woman in question is pretty, but then it gets to you. It has its moments, and you hope for it to smile, but alas. It blathers on without a point, incessantly, and doesn't seem to be improving. Eventually, you're forced to hold the film's hair back as it throws up all over itself. And your shoes. Not a pretty picture.
Raja Sen
COMMENT
Print this article