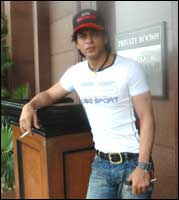 Shah Rukh Khan seems to be one of the few film personalities who favour the ban on smoking in films. And this despite him being a chain smoker.

"I feel it (the ban) would be hard to implement. In practical terms, it seems improbable," says SRK. "I haven't played a character for whom smoking is essential as part of the characterisation. Even in Hum Tumhare Hain Sanam, where I hold a cigarette in my hand all the time, I never light it. I borrowed this trait from the South Indian original of the film, where the hero always puts a cigarette in his mouth when he is agitated. I thought it was a masterstroke.

"Not that I haven't smoked onscreen. I did in (the 1995 Rajiv Mehra film) Ram Jaane," he continues. "But I don't think smoking needs to be an integral part of any character. It's as routine as a chair in the corner of a set or a bedsheet on a bed -- It shouldn't be something around which a film is designed. I don't think any film needs to be designed around a character who smokes."

The day art went up in smoke

"Though I don't think it would be difficult for actors to project emotions without smoking, there might be a problem with some characters. If you're portraying Winston Churchill, how can you portray him without his trademark cigar? It might be tough to depict characters from the underworld without cigarettes. But otherwise, what's so essential about smoking on screen?" the Bollywood badshah asks.

"There's a theory originating from the (health) ministry that watching actors smoke onscreen would encourage youngsters to smoke. I don't know if that's valid. But I do remember seeing a sign in London which said, 'Papa, when you smoke, I smoke too.' I don't know whether my smoking would make my child a smoker. But if you tell me that such a thing can happen, I'd like to take it seriously. I don't know how far the ban on smoking would help eradicate smoking. Let's see how it goes. If it helps in getting rid of smokers, then I'm all for it.

"Actually, the more liberal a society becomes, the more stringent the laws are bound to be. In the US, you can buy a gun off the shelf, and then someone starts shooting down kids in a school. So they need strict laws to make guns accessible to people. With air travel being so easy now -- you can book tickets by e-mail -- airport security is tougher. In a banana republic, nothing is allowed. In our society, everything is allowed. Therefore we need to check the flow of liberal ideas. It isn't intolerance that triggers off laws against things like smoking or buying ammunition. More rights entail more obligations."

SRK concludes by saying he is always careful about what he portrays onscreen. "For example, I'm very careful about bad language on screen. I don't use it. I won't. The most extreme emotions can be expressed without getting abusive. I'm not comfortable with bad language. But I don't dispprove of it. I believe cinema has to have the freedom to express itself in any way it likes. I may not like talking to a particular journalist. But that doesn't mean I'd stop him or her from writing."