Which SRK do you prefer? 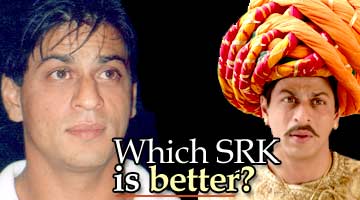 Shah Rukh Khan has been playing around with his onscreen appearance for quite a while now, and Paheli sees the superstar sporting a moustache, as Rajasthani as it gets.

And the jury is out on this change of look.

While the new Khan soupstrainer has had many a woman swooning, it has also irritated several fans who like SRK just the way he is.

Tell us which Shah Rukh you prefer, with or without the mooch.