Jane Smith is peeved, and it's understandable. She's knee-deep in household debris, her house is under siege by heavily armed bounty hunters. And she has finally learnt the terrible truth about her husband.

Then, John Smith, the man she loves who has deceived her all these years, has the gall, the nerve, the freakin' audacity to hand her a bloody pistol. She snaps immediately: 'Why do I get the girl gun?'

Mr & Mrs Smith, starring Brad Pitt and Angelina Jolie, is not about the similarly named television series about two spies whose codenames happen to be Mr & Mrs Smith. Neither does it have anything in the world to do with the 1941 Alfred Hitchcock film of the same name, the only pure comedy the great director ever helmed.

This film, written originally by Simon Kinberg (xXx:State Of The Union, X-Men 3) as a thesis for his masters degree at Columbia, is about -- hold those grenades -- marriage.

The fact is, after five or six years of marriage (he says five, she says six) John and Jane Smith are nowhere close to a utopian family life. As they confess to their shrink during the skillfully executed opening credits, things are not perfect.

Life has been reduced to monotonous regularity, as both husband and wife spend too much time on their careers, only at home for the seven o'clock martini before dinner. Clearly, things need to change.

This is where Hollywood comes in. From this premise, the film could potentially be a funny, yet deep and insightful look, using assassination metaphors at married life and relationship problems, space, and intimacy.

On the other hand, as director Doug Liman (The Bourne Identity) emphasises via his casting coup, a world where Angelina Jolie and Brad Pitt aren't making love enough times a week is nowhere close to real. Suspend disbelief, people, and forget trying to look for deeper meaning. Bring on the popcorn. Mr & Mrs Smith is escapist fantasy at its hottest.

And heat is the keyword in this film. Angelina Jolie, undeniably nothing of a plain Jane, has never looked more va-va-voom than in this racy, explosive thrill-ride. Brad Pitt, continuing his short-cropped Rusty look from Ocean's Twelve, comes across as David Beckham with the desirability factor turned way up. And to be fair, both have been pictured in their underwear, even as it is clearly established that Jolie wears the pants in the relationship.

But what relationship? The convenient premise of the film is that the Smiths, despite their picket-fenced life in suburbia, are two top contract killers. He thinks she works on Wall Street; she thinks he is a contractor. One not-so-fine day, both are hired to gun down Benjamin 'The Tank' (Adam Brody), a curly-haired boy proudly wearing his Fight Club t-shirt.

Jolie is on location, ready to take out her target, when a dune buggy bounces along her way. She fires at the interruption, and that's not a really good idea. Brad Pitt, wearing bermudas and carrying a Widowmaker, thuds back with a glorious explosion.

Soon, both wake up to the fact that the other is an assassin. No, it's much worse: the other is also an assassin. They are rivals, top professionals who have not seen this coming. Brad's boss, (played by Vince Vaughn, an actor bettering his comic excellence with each successive film) who lives with his mother ('the only woman I trust'), offers Pitt a smelly couch for sanctuary and bluntly tells him that it's blindingly obvious he was being taken for a ride all along.

Now, the film could possibly have digressed into both parties feeling betrayed and hurt and needing to sit down and talk things out. Again, Liman wisely takes the whoa road. These two aren't as upset as they are furious, as disillusioned as they are ruthless. So the unmasked couple sits down to dinner, each trying to second-guess the other's next move, Pitt wary of the carving knife in Jolie's hand. Suddenly, as the tension hits a peak, it shatters. Like Angelina's windshield due to an inadvertent Brad bullet. She growls. Now it's war.

For all this build-up, the film's climax admittedly peters down to relative tameness. But then that is when the stars come in. Most of the film's flaws are covered up by Brad being hilarious, or Jolie merely being powerful. These are two action heroes at the height of their powers, having a blast. This is, basically, the sexiest action film in a long time, guaranteeing a good time at the cinemas. 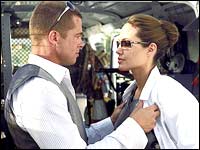 Oh, and the gossip. More than half the world's publications have wagged cover-page tongues at the hinted 'relationship' between Pitt and Jolie. Jen Aniston, if you're listening, I'd suggest you watch it. Brave out the sex bits, because, in the end, it proves that there really couldn't have been anything between your ex-husband and the awesome Angelina. While comparing kills (or headcount, if you so prefer), Brad thinks a while, and says, '50.' He then relents a little, and confesses to 'maybe 60.' Angelina, eyelid free of any movement, says '312.' Gulp.

Assassinations aside, Brad Pitt is hot, sure, but Angelina Jolie today is in a whole different league.

Mr & Mrs Smith is all about physical chemistry, the term here going comfortably beyond just sex. The intimacy is fantastic, of course, Hollywood's stunners expectantly sizzling under the sheets in perfect, taut, animal disharmony. But the fun bits (perhaps we say this because 'a very steamy scene' was edited out for the film to get a PG-13 rating) are the fighting. With teeth gritted and pout in place, Jolie hammers furiously into Brad, walloping him hard. For his part, Pitt knocks his wife to the ground and kicks her hard in the guts, again and again and again. Jolie responds with an elbow drop. He grins, she growls; and vice versa.

This isn't shocking, disgraceful behaviour. Well, okay, it is, but then the Smiths are enjoying it. The two gorgeous assassins, tearing at each other a la Stallone and Banderas (in Assassins), have never looked happier.

For these mercenary pros, this primal display is simply foreplay. Yummy.