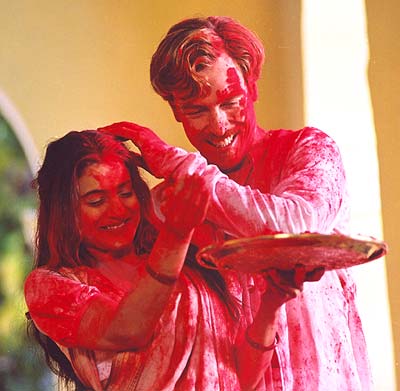 Ketan Mehta's much awaited Mangal Pandey: The Rising, promises to release this August.

The film has been the subject of massive expectation since it marks Aamir Khan's return to the big screen after a four-year sabbatical.

And his fans have been parched.

In one of the first non-Aamir stills from the historical epic, we can see Amisha Patel (Jwala) with Toby Stephens -- the British actor who played the fiendish Gustav Graves in the James Bond film, Die Another Day -- who plays Captain William Gordon.

Gordon saves Jwala from being burned at her husband's pyre, and gives her sanctuary from her furious relatives.

In the film, Jwala, a simple village girl, becomes a metaphor for the relationship the British have with India.

As the film says: 'You may share your bed with a native -- not your loyalties.'