Mansarovar will move you

If you want to read emotions -- the ones revolving around instances considered trivial -- then this one's for you.

Debutant director Anup Kurian's Mansarovar spells relationships against the backdrop of vivid landscapes. Devoid of song and dance sequences, this movie is certainly not run-of-the-mill.

It dwells heavily upon people and the most delicate of relationships -- love.

The movie, which won critical acclaim at various international film festivals, centres around Malathy Chandran (Neha Dubey), the vice president of a publishing company, who is going through a phase of indecision in her personal and professional life.

She happens to work with George Nair (Zafar Karachiwala), who makes her delve into her past -- an important part of which is writer Ravi Roy (Atul Kulkarni).

Much of the film is told in flashback, as the love story unravels through the many letters that Ravi and Malathy write to each other before he disappears. 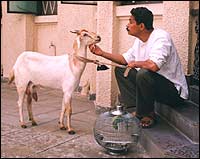 Director Anup Kurian manages to capture theatre actors Neha Dubey, Atul Kulkarni and Zafar Karachiwala in what could be called their finest on-screen performance yet. The serious brother (Zafar) and happy-go-lucky writer (Atul) do not fail to move the audiences.

The movie does slow down in parts but Kurian keeps it short as it runs for not more than two hours.

Kurian brings out the beauty and magic of Kerala's food culture. The film also debates on issues such as arranged marriage and layoffs. The soft background music enhances the film.

The small budget film's overall look is simple and realistic.

It ends on a different note, as it does not have the usual 'happy ending.'