'Playing the good guy is boring' 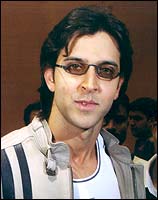 Hrithik Roshan is currently on a mission: he's in China honing up his fighting skills, a la Keanu Reeves in The Matrix, for some upcoming films.

During a break from emulating a diving eagle, the star spoke to Subhash K Jha.

A lot of action films coming up for you these days.

Yeah. Dhoom 2 is going to be a thriller. Though I'm training predominantly for my father's film (the sequel to Koi... Mil Gaya), the new skills will help me throughout my life and career. I will continue to train even when I return to Mumbai.

Why a villain's role?

Playing a villain is very multi-dimensional. Comparatively, playing the good guy is boring. A villain has so much more to do! I like the challenge of being bad. Apart from Yashraj Films being such a reputed banner, I see a great deal of honesty and integrity in their work. My role in Dhoom 2 sounds like fun. It's the kind of suave villain's role I've been longing to do for a while. It instinctively excited me. It's just the excitement I need in my career.

Please don't make a career out of playing villains!

You never know (laughs) If I get as excited about another villain's role, I just might take it up.

I start my father's film first, and then Dhoom 2. There will be minimal overlap. I am very excited about getting back to the sleepless nights that come with working again.

Are you nervous about playing the bad guy?

When I did Koi... Mil Gaya, people said we were going into territory everyone had failed in. I was warned that a sci-fi flick was alien to Hindi moviegoers. But Koi Mil Gaya worked.

Now, I'm being warned that sequels don't work in India. But I am doing two sequels even though I can't remember one sequel that has worked. The challenge of doing something that hasn't succeeded so far attracts me. I want to walk on a road where no one has been before. We should have sequels in Hindi.

What exactly are you training for in Hong Kong?

This technique of flying in the air with invisible wires, seen in Hong Kong martial arts movies (such as) The Matrix or Crouching Tiger Hidden Dragon is something we've been using in Hindi cinema for a few years, but not properly. We tried it in Koi Mil Gaya, but I wasn't satisfied with it. These guys in Hong Kong have perfected the art. I plan to take it a step further in my dad's new film.

I am being trained by Tony Ching who has done films like House Of Flying Daggers and Shaolin Soccer. We actually wanted the Wachowski Brothers who did the Matrix films. They've hit the big-time in Hollywood, and were, therefore, beyond our budget. Ching is still in the wings. He has had only one major hit, Hero.

How much of Ching's expertise will go into your film?

It depends on our budget. The idea is to provide our audiences with the kind of action sequences never seen before in Hindi cinema. Compared with what we plan to do in the sequel, Koi Mil Gaya was just a trailer! My dad and I plan to go somewhere the industry has never gone before. Actually, I needed 75 days but I can only give 20 days to the training. Ching is happy with me, and thinks 20 days will suffice. He paid me quite a compliment. I'm 10 times faster than any actor he has trained before!

Is the sequel a safer bet than than Koi Mil Gaya?

It's entirely up to the emotions we project. The action scenes can only be the appetiser, not the main course. Great action without a well-told story is meaningless. My dad and I are very conscious of this precondition for our film. What I'm training for in Hong Kong is certainly not going to be the main event in our film. Our film is certainly not an action flick.

In Dhoom 2, you pair with Aishwarya Rai for the first time.

Yes. From the feedback that I get, people are looking forward to seeing us together. Of course, finally, it's the characters that work. Let us hope our characters justify our presence.

You made a rare appearance with Suzanne on the television show, Koffee With Karan.

I was very nervous, and it showed. Though she was completely in control, I was nervous for her sake. I suddenly felt protective towards her.

Are you frightened by the number of breaking marriages in Bollywood?

I'm very secure in my marriage. It's not for me to judge other people's marriages. But it's sad when things go wrong between two people. God bless those going through the trauma.

Are you still too much of a child to start your own family?

No no. I've grown up. But I'm not ready yet for fatherhood!