'You will relate to Kisna!' 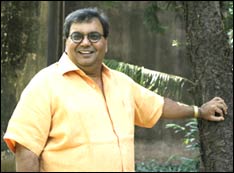 After four long years, Bollywood's showman has returned to his directorial roots. With a massive period film. A few days before the release of his epic, Kisna, rediff.com's Raja Sen catches up with Subhash Ghai for an exclusive three-part interview, beginning today.

What are the expectations from Kisna?

The people from Sony Music called -- the music is doing very well. It's currently number one on the charts. I hope the film does that well. A lot of pain and hardship has gone into making this film, and we haven't been able to sell it because it doesn't have a star cast to speak of. And it's a period film, which is expensive: we went on spending because we didn't want to compromise on the quality of the film.

Where did you shoot the film?

Paudi Gadwal, Uttaranchal; Badrinath; Mukteshwar. The story is a journey from Devpriya to Delhi, so we had to go for authentic locations. It's difficult because all the buildings have been modernised now. We had to shoot the Haridwar rail station, but the new station has been built, so we had to find an old station. A lot of detailing had to be done.

Are you satisfied with the way the film has turned out?

Yes. At the moment, I've lost my judgement but I know I was excited writing and shooting the film. We've all been very happy. Closer to the release, you're just waiting for the reaction of the media and the people -- all art needs reconfirmation from the people. This is for the people, and it's a mainstream film, to appeal to masses and the classes.

We have two cuts of Kisna. The English version, The Warrior Poet, is a two-hour cut, and the Hindi film is two hours, 50 minutes. I hired a British editor, with British sensibilities for the film, in order to craft it to be something they like. He didn't cut all the songs. Seven songs in Hindi have been cut to three-and-a-half songs in the English version because he loved the songs and the picturisation. When I asked him why should the Western audience watch this film, he replied, 'Because it's a trip to India.' Colours, music, emotions, relationships.

I am hopeful that it'll work with the Western audiences. I'm targeting an April/May release overseas.

You've been the first to start making films for the international audiences, ever since Pardes

The audience is there and it's growing. You need to grow. Suppose tomorrow I come to know that the Japanese or the Chinese are interested in watching Hindi films, then I'll certainly incorporate some of their cultural aspects in my films.

It's all about the relationship between a performer and his audience. We observed that the NRI audience grew after the success of Khalnayak. Hum Aapke Hain Kaun and Dilwale Dulhaniya Le Jayenge packed the theatres abroad! So I made sure my movies grew into films for the Indian Diaspora, and weren't limited to domestic audiences.

Now, the audience has grown further: not just Indians abroad, the world wants to see Hindi films! Across Europe -- France, Germany, England -- and the US, they all want to watch Indian films. The interest is there, so I developed this film in two versions.

Kisna is a story with universal appeal. It is an amazing story with great appeal, for every human being on earth!

So you're very confident about the film?

We need to be; it's better we be confident!

Is the film set in 1947? From the promos and the movie stills, it looks much older.

The fact is, it's set in the interiors, the Indian heartland. Even if you go today, it'll still look and feel like it's the 19th century. The interiors have been neglected by civilisation, and Kisna is based in a deeply neglected area. Which is why, even in the 1940s, it looks older.

Do you think this film will work? A film like Yaadein worked well with the US audience but this is a period film. Isn't that always a harder proposition?

The backdrop may interest audiences partly, but the strength is in the story. This film could be set anywhere, at any time. Eighty per cent of the film is the storytelling -- it creates the entertainment. When you watch Kisna, you start relating to it, and the settings. You begin to live with the people of that era, and understand what they were going through. You will relate to Kisna!

Don't miss the second part of this exclusive interview!