Move over Steven Spielberg, the new blockbuster-maker is here to stay. Peter Jackson's masterful retelling of King Kong is a spectacular achievement by any standard, the kind of awesomely BIG film that's incredibly hard to describe.

This has massive helpings of everything an entertainer needs to have, laced by a lot of the unexpected -- no mean feat for a film where everyone knows the story. This is -- a rarity in modern, more jaded times -- a 'Wow!' movie.

Once upon a time, there was a hairy, plump protagonist. Often misunderstood, he nevertheless lived with massive dreams. Which is why he made movies. Peter Jackson has always been an inspired filmmaker, a fact fans of his uproarious and supremely cheesy B-grade horror films will attest to. With gore classics like Bad Taste and Braindead, it was surprising to see the filmmaker unforgettably take on the ambitions of adapting J R R Tolkien's masterpiece.

King Kong, however, is a much less surprising decision. Over the years, moviedom's biggest monkey has been reduced to cornball cliché, with bad Jeff Bridges films and low-budget disasters battling Japanese lizards.

So when Jackson became one of the world's biggest filmmakers, with a cult following and a mantelpiece full of Oscars, his plan was simple: make the biggest B-movie in the world. Actually, no, rescue the hirsute King from the B-grade, and give him his rightful place at the top.

Super-ambitious? Sure. Pulled it off? Oh, yeah.

Jack Black plays Carl Denham, one of those nutty directors National Geographic would call Man Of The Year. Obsessed with the mysteries of nature and armed with cartloads of pluck, Denham outrageously hijacks studio funds and equipment, bands together a not-so-merry crew, and sets out for the mythical Skull Island.

Or he would, but his leading lady has dropped out of the suicidal expedition. The only reason most others are going is because they think they're headed to Singapore!

Denham finds Ann Darrow (Naomi Watts), an attractive vaudeville stage performer who is pining for a decent meal. Picking her up off the streets, he offers her the leading role in the picture -- simply because she'll fit into the already-prepared costumes. The actors, or the plot, aren't really concerns for a filmmaker like Denham, he just wants to set forth and capture a world never seen before.

The motley bunch do arrive on the infamous island, and in scenes invoking the souls of in-form George Lucas and Robert Zemeckis, they are savaged by natives, and trampled by dinosaurs. Denham forges ahead, madly, caring not that his cinematographer and sound engineer have died horrible deaths. The fact that a rampaging brontosaurus made him expose an entire reel of film, on the other hand, causes him great grief.

In the midst of all this, the savages kidnap his leading lady. It is now that playwright and inadvertent scriptwriter, the smitten Jack Driscoll (Adrien Brody) goes it alone, planning to rescue her from the clutches of a decidedly large primate. Already, the monkey is showing characteristically male signs of behaviour, falling all over the winsome blonde.

Denham, with incredible desperation, traps the beast, and with great savvy, christens him King Kong. The animal is brought to the city and made a freak show, but flashbulbs make him insane and the scene is set for an iconic showdown on the roof of the Empire State Building.

The film is jaw-droppingly fine. Kong stomps onto screen after more than an hour, by when we are well acquainted with the ship's primary occupants, and the feel of the film is masterfully in place. Romance is simmering between Ann and sharp-beaked playwright Jack, and there is plenty of broad referencing, hats doffed toward Hollywood's biggest clichés. Chuckling now is calculatedly in contrast to the horrors that follow.

The cast is quirky, yet apt. Jack Black has the role of a lifetime, and carries the film on his chubby, megalomaniac shoulders. His Carl Denham is likable, relatable, yet very smarmy indeed, and you come away loathing him while also feeling pity. Adrien Brody is a hero not meant to be good looking, and as a writer, his romantic dreams propel him forth to unlikely gallantry. Kyle Chandler plays leading-man-by-name Bruce Baxter to perfection, all bluster and ego.

Naomi Watts is a masterstroke. While not as stunning as some of her Hollywood contemporaries, the Mulholland Drive actress juggles Kong's heart (both the beast's and the film's) with a magical, passionate performance. Her best scenes are wordless, and she works them with great finesse.

Her hero, of course, is the ape. King Kong is a magnificent creature, a majestic ape with a repertoire of fine wrestling-holds and expressive eyes. Andy Serkis (Gollum from Lord Of The Rings) who also plays Lumpy, a one-eyed cook in the film, grunts emphatically enough to make King Kong breathe, giving him soul. From anger to indignation, surprise to ecstasy, we are soon empathising, totally bowled over by the mammoth monkey. A scene on a frozen lake is indescribably beautiful, and pure movie magic.

The film is a gargantuan effort, one of those all-stops-pulled-out movie events that enters popular cinema history. 1933 is rendered wonderfully, the characters are well etched (often cardboard, admittedly, but well cut-out), and the referencing and in-jokes do not overshadow the simple, melodramatic narrative. There are special effects at every turn, and they are overused (where else should they be, darn it?) skillfully. Flaws and loopholes will arise (how in they world could they take the big ape back to the city on that tiny, teetering ship?) but King Kong is not about realism. 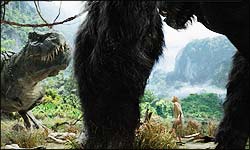 Oh, and vintage Jacksonophiles, despair not, there's lots of gore. Sometimes a wee bit too many bugs, but some lip-smackingly (probably not the most appropriate of adjectives, but we'll leave that be) classic gore.

Peter Jackson has done something spectacular, and it really may be time for Spielberg to hand him the Best Entertainer baton. Jackson's dinosaurs are a far cry from Steven's iconic Jurassic Park a dozen years ago, and his choice of casting Steven's favourite actor's kid (Colin Hanks, son of Tom, plays the embittered assistant director Preston) might just be the signal that a new generation has come forth to take blockbuster magic forward.

King Kong has enough power to be this generation's ET.