Kalyug is just about average

Mohit Suri's first movie Zeher was a hit. But it is difficult to say whether the director will score again with his latest, Kalyug.

Because, the main reason people flock to theatres to watch such type of films is skin. But, Kalyug doesn't show too much of that. Deepal Shaw  of music album Baby Doll 'fame' -- looks and dresses the way she dresses in her album. So, what's new?

And, Kalyug's script has too many flaws.

But first, the plot.

The movie begins with a flashback where Kunal Darr (Kunal Khemu) is in police custody. He narrates to his lawyer how his father, a Kashmiri Pandit, and him came to Mumbai fleeing terrorism in the Valley.

Renuka (Smiley)  a family acquaintance, one presumes, because there is no clear explanation -- comes to Mumbai to stay with Kunal's family, falls in love with Kunal and they get married.

They go to a hill station for their honeymoon where their intimate moments are clandestinely captured on camera. Kunal and Renuka are arrested for indulging in pornography. Renuka commits suicide. 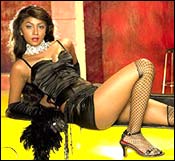 He gets bail, and reaches Zurich in search of the pornographers. He meets Ali (Emraan Hashmi), a wheeler-dealer, who does anything for anyone as long as he gets the money.

Kunal is in search of Annie (Deepal Shaw), who hosts the Internet show on which Kunal's honeymoon was shown. But Annie is also a victim. She was forced into pornography because of the Gujarat earthquake.

Kunal Khemu made his mark as a talented child artist. And he does not disappoint in his first movie as an adult. He is very good in some sequences, but doesn't look matured enough to deal with such a sensitive issue.

Smiley is just okay in her short role. Deepal Shaw is not attractive, to put it mildly.

Emraan Hashmi surely has a fan following. His entry prompted a whistle fest in the theatre I was in! Maybe it's because of Hashmi's reputation as a 'serial kisser'. But fans of Emraan's undressing-his-heroine skills will be disappointed too.

After her break-up with husband Saif Ali Khan, Amrita Singh made her small-screen debut with the soap Kkavyanjali. She is quite okay in the movie, but doesn't really look the cruel businesswoman her character is. Ashutosh Rana  yes he is there too -- is royally wasted.

And now to just some of the plot holes we referred to in the beginning:

Kunal is out on bail. So how can he fly to Switzerland? Legal eagles, please enlighten.

And, to think a 21-year-old guy can take on an international mafia ring single-handedly is simplifying things to a ridiculous extent.

There is no continuity in some scenes. Example, in one shot, you see Annie without her shoes. Next moment  and this is an outdoor shot -- she has a shoe on.

Trust me, there are more such bloopers.

The music is okay. And the song Jiya dhadak dhadak jaye is quite catchy.

Before I sign off, I have a request to movie producers.

The way you are making movies on different topics -- like this one on pornography  can you please make a movie on black-marketing? I saw at least 10 people selling Kalyug tickets in black.
Patcy N
SHARE THIS STORYCOMMENT
Print this article