'You don't mess with cricket in India' 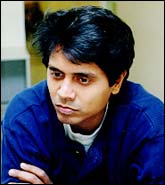 I just got my first ever cell phone three months ago," Nagesh Kukunoor grins.

In an age where cell phones are like an arm extension, the maverick director's words take you by surprise. "Cell phones are a leash," he explains.

As if to prove his point, his cell rings and a few minutes later, he receives a text message.

The 38-year-old director enjoys his low profile, and even fiercely guards it. That's why one rarely hears of him in between his films. One of the few times he enjoys his fame is when he gets restaurant bookings easily.

And, of course, when his film releases.

His latest, Iqbal: The Rampur Express, is an unusual tale about a deaf and mute boy (Shreyas Talpade) who wants to join the Indian cricket team. And he has a village drunk (Naseeruddin Shah) for help.

"There are two reasons why I wanted to make Iqbal," Nagesh explains. "Firstly, I wanted to focus on the underdog because you don't see that often in Hindi films. Secondly, I wanted to treat disability with dignity. Usually, such films are accompanied by a lot of self-pity and weeping. But you know, disable people don't always wake up in the mornings crying. They have their own lives to lead. Five minutes into Iqbal, you will forget about the disability."

Shreyas, a Marathi stage and television actor, seemed like an unlikely choice in this Subhash Ghai production.

Nagesh says, "You can fake batting, but you really can't fake fast bowling. So, first, I wanted a bowler to play the lead in my film. I thought I could make a cricketer an actor. But sports people don't necessarily make good actors. So I decided to take an actor. Someone recommended Shreyas' name to me. During the audition, he told me that he used to play cricket before and was a medium-pace bowler. I made him bowl and realised he was not fibbing."

There were two things Nagesh researched on. One was cricket -- "you don't mess with cricket in a country like ours" -- and sign language.

"We discussed the existing sign language in schools," he says. "You know, Telugu sign language is very different from the English sign language. Besides, Iqbal did not go to school technically. So I researched the sign language for the 100 most popular words."

Nagesh did not bother watching films portraying dumb and deaf people. "I did not want any film to be a point of reference to me."

The only time an English film was a point of reference for his film was in Teen Deewarein (2003). Nagesh was inspired by Shawshank Redemption and wanted to make a film on prison life.

"But Iqbal is very different from Black," he states clearly.

The Rs 26 million film was shot in 40 days. But considering Nagesh's track record of finishing films in about a month, this has been the longest shooting schedule.

And what was his biggest challenge? "I had to un-train actors from heightened Bollywood and television drama. Besides, Shreyas had to bowl fast bare feet!"

Nagesh's association with Subhash Ghai, or SG as he calls the veteran Bollywood filmmaker, goes back a couple of years.

After discussing some ideas, he met Ghai and pitched another idea at him. But Ghai liked Iqbal better.

"SG has never tried to be interfering. When we came together, I was very clear about the fact that it would be my film. Once that was settled, everything was fine. SG saw the script and then the first cut directly. Everything about the film is my own," Nagesh says.

The director has dabbled in almost every genre -- be it Hyderabad Blues (romance), Bollywood Calling (comedy) or Teen Deewarein (thriller). But the filmmaker is not satisfied. He would like to do films in every genre, as long as the story is good. He says he would like to make a sci-fi film as well. The inspiration being the newest entrant in his top five Hollywood films: Matrix.

But right now, only Iqbal is on his mind. "After having watched the film, I can say confidently that we got it right. (Legendary Indian cricketers) Sandeep Patil and Sunil Gavaskar watched the film and they have said it was very authentic," Nagesh concludes with a smile.

What you didn't know about Nagesh Kukunoor:

*I love travelling. I've decided to visit at least one country every year. And so far, I've managed that.

*I like cooking. But I don't cook when I go to Hyderabad. My mom is the best cook, and I eat whatever she makes.

*I like Indian films like Hrishikesh Mukherji's Bawarchi, Bhagwan's Albela and K Vishwanath's Sagar Sangamam. Sometimes, I include Sholay in my list of favourite films too. Among English films, I like Shawshank Redemption, Terminator 2: Judgement Day, Raising Arizona, Magnolia, and a very new entrant, Matrix.

*It's very hard to tell who's really a good actor in Bollywood. All the actors play the same roles. Except maybe Aamir Khan. There's just one hero and his story. Sometimes he wears a suit, sometimes he plays a villager

*Before last year, I used to hate Mumbai. There was too much pollution, too much smell, lack of space It was too extreme for my senses. But now, I have friends here, so I'm beginning to like it.