'I have recovered my cost on Mangal Pandey' 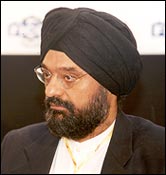 The big budget Mangal Pandey may have opened to mixed responses all over the country but producer Bobby Bedi claims he has already recovered the money spent on the film.

The film stars Aamir Khan as the freedom fighter whose rebellion led to first war of independence in 1857.

Bedi is not worried by the controversies surrounding the film by what he calls some "vested interests" who feel the film should be banned for distorting history and showing the national hero in bad light, thanks to his drinking and visiting prostitutes.

In an exclusive interview with Senior Associate Editor Onkar Singh in New Delhi, Bedi says he hopes to rake in some profit from the film as well.

On the contrary, according to the feedback I have received, people have liked the film. There are long queues at the ticket counters. Since the film was released on the long weekend (Monday, August 15, was a holiday) -- which was part of our strategy -- the film has done well.

What makes you so optimistic that the film is doing well?

I am basing my claims on reports that I got from around 1,000 screening venues in India and abroad. We had 100 per cent sales in the first three days. I expect sales to go down to by 20 per cent on weekdays but we have another long weekend coming up, around Raksha Bandhan.

You think you will recover your money?

I spent about Rs 50 crores on production, advertising, film distribution and so on. We got 800 prints ready for simultaneous release of the film across 1,000 screens around the world. We ensured that there was no pirated version of the film in the market. Someone tried to release pirated copies on the first day and we had him arrested in Ghaziabad near Delhi. Once we did that, we were sure about our sales. In fact, I have already recovered my cost and now, I will rake in some profits as well.

There is a hue and cry for banning your film in Uttar Pradesh as you have not shown the village where Mangal Pandey was born.

I am not worried about the ban. I do not think there will be one. We did not shoot the film in Ballia because the film is about the rebellion in Barrackpore where he was posted. I am willing to mention that Mangal Pandey was born in a village called Ballia, if that can pacify those agitating against the film.

You say there will be no ban on the film in UP. Does it mean you have struck a deal with those in power?

I am not saying anything (smiles).

Mangal Pandey's relatives allege that you have shown him going to brothels and drinking. Do you admit to distorting facts?

I would not say that. Mangal Pandey is not shown visiting brothels. He goes to the brothel chasing an English soldier on two occasions. He does not drink but we have shown him taking bhang. This was prevalant at that time. So we have not made any distortions. We may have added a few fictional characters to give a boost to the film and the hero's character.

You mean the addition of Rani Mukerji's character?

Yes, she forms the central part of the film. If you remove her, there's nothing left in the film. She is the conscience, the one who instigates Mangal Pandey.

She tells him that while the prostitutes sell their bodies to the English, the Indian soldiers have sold their souls to them. Even in the end, she plays a crucial role.

Those who have seen the film feel it could have been shortened.

Ketan Mehta, the director, and Aamir and I also felt that the first hour dragged. We've had several screenings to see if we could shorten it. But we were convinced that there was nothing we could edit out because we had to set a stage for a film of this kind. So we left it like that.

The second part of the film moves fast and the end is very quick as well.

How would you rate Aamir Khan's performance?

He has put in an outstanding performance. His body language and the way he moves his eyes say more than words. I am glad that I have been able to bring Mangal Pandey alive. Until now, we have only read about him in books. Today, the nation is talking about Mangal Pandey. The media should give us our due.

Did you ever run into financial trouble?

I do not recall a moment when we were out of it. Our two key investors backed out at a very early stage. We had to find replacements. But in the end, it worked out well.

Your next venture will be the Mahabharat.

It will be a Rs 300 crore mega project. Mani Ratnam will direct it. Though there have been television serials on the Mahabharat, I still feel there is space for my film. We will start work in 2006. Meanwhile, I plan to take a well-deserved break.