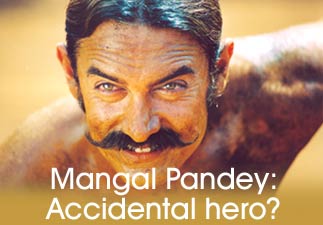 The sepoy lines in Barrackpore were quiet during the afternoon of March 29 in 1857. Most of the sepoys were lounging around, and the white officers were in their bungalows enjoying their siesta before preparing to go out with their families to attend evensong. Nobody anticipated that the serenity was about to be disrupted and history about to be made.

In the late afternoon, a sepoy of the 34th Native Infantry, wearing his regimental jacket but in a dhoti instead of the regulation trousers, appeared before the quarter-guard. It was obvious that he was greatly agitated. He had with him a loaded musket and his talwar. He belonged to the 5th company and his name was Mangal Pandey. He strode around in the quarter-guard, shouting to his comrades. He asked the bugler to sound the assembly and yelled at his comrades to join him: 'Come out, you b**********, the Europeans are here! Why aren't you getting ready? It's for our religion! From biting these cartridges we shall become infidels. Get ready! Turn out, all of you! You have incited me to do this and now you b**********, you will not follow me!'

This kind of open insolence was not common among sepoys, and a naik quickly carried the report of Mandal Pandey's disorderly conduct to Sergeant-Major James Hewson. The naik, in his report to his white superior officer, added that Mangal Pandey was under the influence of bhang.

In a few minutes, Hewson was dressed and was at the parade ground. He summoned the jemadar of the company and demanded to know why the sepoy had not been arrested. The jemadar explained his helplessness, 'What can I do?' he said. 'The naik has gone to the adjutant. The havildar is gone to the field officer. Am I to take him myself?'

Hewson ordered him to fall in his guard with loaded weapons. Hewson later recalled that some of the men grumbled and that the jemadar did not insist on the men falling in or loading. As the sergeant-major approached Mangal Pandey, the latter took aim and fired. The ball missed Hewson who took shelter behind the bell-of-arms (a bell-shaped building where weapons were stored). A couple of sepoys tried to persuade Mangal Pandey to surrender his weapons. By this time, the adjutant, Lieutenant Baugh had arrived on horseback. The incident was now poised to take an even more dramatic turn.

Baugh galloped into the quarter-guard shouting, 'Where is he? Where is he?' He was warned by Hewson, 'To your left! Ride to the right, Sir, for your life. The sepoy will fire at you!'

Mangal Pandey did exactly that and hit Baugh's horse, which collapsed. Baugh extricated himself, drew one of his pistols from the saddle holster and ran towards Mangal Pandey who was reloading his musket. Baugh fired from around 20 yards and missed. He then drew his sword and rushed towards the sepoy. According to Baugh's recollection, he had proceeded about halfway when Mangal Pandey drew his talwar. Baugh looked back to see where his horse was as he wanted to get his other pistol but the animal had wandered off. He decided to engage the sepoy and he was joined by Hewson, sword in hand.

Baugh, in his turn, had received a cut on his left hand, which disabled it. He had another deep cut on his neck and a gash on the back of his head from a musket butt. More serious harm to Baugh and Hewson was prevented by Sheikh Paltu, a Muslim sepoy, who held Mangal Pandey by his waist while the British officers escaped from what could have been their deaths. The saviour of Baugh and Hewson released Mangal Pandey only when members of the quarter-guard threatened to shoot him if he did not let go of Mangal Pandey.

The commanding officer of the 34th Native Infantry, Steven Wheler, now appeared in the parade-ground. He ordered the jemadar to arrest the defiant sepoy.

The jemadar replied. 'The men won't go.' Wheler repeated the order twice and the jemadar told his men to advance. They proceeded a few paces, stopped and refused to go any further. Wheler realized the futility of trying to enforce his order.

He later told the court of inquiry: Someone, a native in undress, mentioned to me that the sepoy in front [was] a Brahmin, and that no one would hurt him. I considered it a useless sacrifice of life to order a European officers, with the guard, to seize him, as he would no doubt have picked off the European officers, without receiving any assistance from the guard itself. I then left the guard, and reported the matter to the Brigadier.

By now the news of the commotion in the parade ground had reached Major-General John Hearsey who commanded the Presidency Division. The news was brought to him by a lieutenant whose hands and clothes were partly covered in blood.

Hearsey called his two sons, who were officers of native infantry regiments, and the three of them left immediately for the parade ground.

Someone warned, 'His musket is loaded,' to which Hearsey's retort was 'Damn his musket!' His elder son called out to him, 'Father, he is taking aim at you.' General Hearsey's reply to his son was, 'If I fall, John, rush upon him and put him to death.'

Hearsey then rode up to the quarter-guard. He pointed his pistol at the jemadar and said, 'The first man who refuses to march when I give the word is a dead man. Quick march!' He then went towards Mangal Pandey; the guard followed while his sons covered the jemadar with their pistols. It was now Mangal Pandey's turn to act.

This is what he did, in the words of Hearsey: It appeared the mutineer had suddenly altered his mind, I suppose seeing there was no chance of escape. He turned the musket muzzle towards his own breast hurriedly, touching the trigger with his toe. The muzzle must have swerved, for the bullet made a deep graze, ripping up the muscles of the chest, shoulder and neck, and he fell prostrate; we were on him at once.

The guard calling out: 'He has shot himself.'

One could say that as Mangal Pandey left the parade ground for the hospital, he moved away from history into myth. He did not die of his wounds. He was tried. The verdict was a foregone conclusion. He was hanged a few days later, on April 8. His actions created a name for the mutinous sepoys of 1857: the British officers called them Pandies.