Aamir Khan is a rabble-rouser. It's a role he has mastered to perfection. His nostrils flare up, eye sockets pop and righteous indignation spills across the screen. It's no surprise, then, that it is this Angry Khan plastered on all posters for Mangal Pandey: The Rising.

Luckily for him, as well as his audience, the rabble-rousing works. He did it in Lagaan. He does it again here. Only this time around, he's better dressed for the occasion.

The difficulty with historical epics like Mangal Pandey is that everyone knows how they're going to end. There may be twists and turns, but we know who's going to hit the bucket. All we can do is wait, patiently, for the denouement. Which is where Ketan Mehta's skill as a director comes to the fore. From the moment the film begins -- a coloured lithograph morphing into a real-life setting on the banks of a river -- you know you're in safe hands. 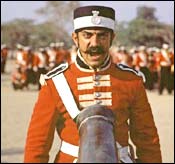 That feeling is reinforced when confronted with certain scenes like the attempted burning and eventual rescue of a sati (Amisha Patel) from the hands of a fanatic mob. She sits motionless, cowed by religion or opium, until the heat of the flames brings her to her senses. Then she shrieks, tries to get off the pyre, and is forcibly kept on by men wielding sticks. It's then you realise Ketan Mehta is a man who believes in doing his homework.

It is the year 1857, and India is firmly under the rule of the British East India Company. It has been in control for a century now, and the cracks are beginning to show. Resentment is widespread, and the introduction of a rifle with cartridges supposedly coated in animal fat only makes things worse. The setting is perfect for a hero to make an appearance. Enter Mangal Pandey.

Mehta's palette is huge; his colours, well defined. He takes a good history lesson and gives it shades all his own.

Holding this lesson up is the friendship between Pandey (Khan) and British officer William Gordon (Toby Stephens). Pandey the sepoy saves Gordon's life during an earlier war in Afghanistan and earns his respect. Soon, they are as close as an Englishman and Indian can be, getting into friendly bouts of wrestling, playing pranks on British officers, drinking bhang and roaming the streets singing bawdy songs.

It is the Enfield rifle that causes a rift. Gordon believes the greased cartridge story is a rumour. Pandey trusts him and uses the cartridge, risking defilement. When the rumour gathers momentum, he accuses Gordon of treachery, then decides to take on the Empire.

From a minor standoff, a rebellion begins to take shape.

Running between these two narrative points are other sub-plots. The sati -- aptly named Jwala -- is rescued by Gordon and promptly falls in love with him. Pandey, on the other hand, gets weak-kneed when confronted by a nautch girl called Heera (Rani Mukerji) who somehow manages to conduct a mock marriage ceremony with him before he is hanged. Yes, there's no escaping the mock-marriage scene in our historical epics either.

Mehta understands that what the British referred to as the Sepoy Mutiny was actually India's First War of Independence. He knows when to let the songs flow, when to reign in the strings. He is also a master of what literary critics call 'the objective co-relative', often using the external landscape to reflect a character's inner turmoil.

Yes, there are incongruities. The Englishman's love for a sati, for instance, or the idea of a commanding officer and sepoy having a boy's night out. There's also something strange about a righteous Brahmin like Pandey taking on his superiors over a religious issue while carrying on with a casteless whore. Then, there's that little matter about his public execution -- not quite plausible considering he was hanged quietly, 10 days before the actual date, to help the British avoid any unrest.

There are also unfinished tales -- of Jwala, Heera, Kamla (Mona Ambegaonkar) and Gordon's first English flame, Emily (Coral Beed), along with other annoyances such as Gordon's often indecipherable Hindi, the damage done to the narrative pace by switching from English to Hindi, and Om Puri's deadpan, schoolteacher drone explaining things as if to an audience collectively afflicted with Down's Syndrome.

Taking pot shots at these issues is easy. It is the larger picture that demands attention. Like the fact that a talented director and equally talented cast manage to make you sit through three hours of cinema despite your being more than well-acquainted with the plot.

The stuff of Bollywood is all in place -- colour, music, the obligatory Holi number, men refusing to die from bloody wounds. It's the themes that carry this one through. When a wounded Pandey tells Captain Gordon, 'We are all untouchables,' you realise Mehta has managed to depict a man coming to terms with personal demons. That's when the incongruities fade away and you begin to find something believable.

While Khan and Stephens are superb, their skill, coupled with well fleshed-out roles, often make the other characters seem naive. The Englishmen are all painted as villains. And the other soldiers could well have comprised the guys Aamir played cricket with in Lagaan.

Rani Mukerji looks delectable and puts in a spirited performance. Saroj Khan does what she has always done -- choreograph a song like nobody else in the business. A R Rahman's music, though sometimes incongruous, still captures the moods asked of him. There's also a chorus, much like Greek theatre, only this one sits atop an elephant and sings snatches of song at various points.

Himman Dhamija's cinematography ought to get him a couple of awards. And Kirron Kher shines in the 15 seconds allotted to her as the brothel keeper Lol Bibi. On the other hand, Tom Alter (playing an officer called, simply, Watson) is present for reasons known to him alone.

Mangal Pandey brings into play a remarkable set of references (thanks to Farrukh Dhondy's screenplay), ranging from the East India Company's opium trade to the role of other freedom fighters such as Rani Laxmibai (Varsha Usgaonkar), Nawab Azimullah (Shahbaaz Khan) and Tatya Tope (Deepraj Rana). The pieces of the puzzle may not be sharply etched. And yet, three hours later, they somehow manage to fit.