Which show will you watch: Jassi or KBC 2? 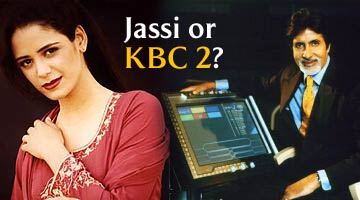 As Amitabh Bachchan flamboyantly keeps rapping at us in the Kaun Banega Crorepati 2 promos, umeed (hope) should be dugna (double).

Now, it seems that television is offering its viewers dugna entertainment on Friday, August 5.

While Star Plus launches its super-awaited blockbuster, KBC 2, Sony Entertainment Television refuses to be left behind. Friday, apparently, is also the day of Jassi's shaadi! Yes, television's iconic geek-turned-babe is finally getting married, in a special episode of Jassi Jaisi Koi Nahin.

So what will it be? What will you be watching?