Will Kaal be a hit? 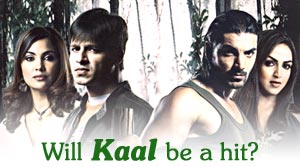 The time has come for the marquee to welcome another Karan Johar release. Kaal is all set for release on April 29.

Expectations are high on this one. And here's why: Karan has never had a flop in his career. All his films from Kuch Kuch Hota Hai, Kabhi Khushi Kabhie Gham to Kal Ho Naa Ho have been declared hits.

Kaal is co-produced by Bollywood's other badshah, Shah Rukh Khan, who also repeats his Chaiya chaiya magic with Malaika Arora Khan in a special item number.

Karan's lucky mascot Kajol may not feature in Kaal, but her husband Ajay Devgan, a powerhouse of talent these days, shares prominent screen time.

Besides, Kaal is directed by Soham Shah, who assisted Ram Gopal Varma in the horror hit flick, Bhoot.

But Kaal has a few cons going against it too. Dharma Productions treads alien territory, as it moves away from the usual romantic, emotional dramas, and into the thriller genre.

Actors Ajay Devgan, Vivek Oberoi, John Abraham, Lara Dutta and Esha Deol have been going through a rough patch in their careers, as all their recent films have bombed at the box-office.

Is Kaal another desi version of the Screams or Urban Legends? Will Kaal become a hit like all other Karan Johar films? Will you watch it on the big screen? Or will you give it a miss?