'It will be a stylish Rajni film' 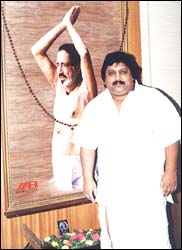 ver since Rajnikanth announced his new film Chandramukhi with Sivaji Productions, the Tamil newspapers are full of stories -- genuine and imagined -- about it.

, Sivaji Ganesan's eldest son, who is producing the latest Rajni film along with his younger brother Prabhu, talks exclusively to rediff.com about how the film came about.

It has been 12 years since you made your 49th film. All of a sudden, you are making a film with Rajnikanth.

This is also the 50th year of Sivaji Films! Two years ago, while we were talking, Rajnikanth said we should do something to celebrate the 50th year.

Four weeks ago, he called me on a Sunday afternoon, and asked what I was doing. I told him I had had a lot of biryani and was spending time with my sons!

He laughed in his stylish way, and then asked if I was doing any new production. I told him we are thinking of doing a Hindi film with Rajkumar Santoshi in March. We are also doing a Telugu serial which my cousins are looking after. I was quite free at the time.

It came as a pleasant surprise. On a Sunday afternoon, after a heavy lunch, this suggestion from Rajnikanth was like superb dessert! I said, 'I am very happy sir.' He told me he had heard a subject, and we would make a film on that.

Is it based on the Malayalam film

Manichitrathazhu as it has been reported everywhere? Apparently, Rajnikanth saw its Kannada version and was very impressed.

I don't want to say Chandramukhi is going to be based on this film or that film. The outline of the film is based on a couple of films but you know, we have to write a screenplay to suit Rajnikanth.

We have changed the story a lot. I don't want to give you the story right now. You might as well see it on screen.

Why so much secrecy?

There was a lot of secrecy about his last film, Baba, too. But that did not help the film.

There's no secrecy at all. I haven't seen Manichitrathazhu. It's Vasu's story. We heard the story and liked it. I don't want to lie. Neither do I want to tell the truth! (laughs)

Rajnikanth was very happy with the story and he asked me to convey the message to Vasu. It so happened that Vasu was walking out of the Guruvayur temple when Prabhu called him.

When Prabhu conveyed the news that we were producing a film with Rajnikanth and he was directing it, he was in tears. He was elated, and so were we! Then all of us went to meet Rajnikanth in Bangalore, and started talking more about the film.

Is it true that at the silver jubilee function of Mannan, Rajnikant spoke about acting in the 50th film of Sivaji Productions, and that was why he called you?

At the silver jubilee celebration of Mannan, he said this company made movies very professionally like international companies, and he had to definitely do another film with us. That was long ago. Prabhu had asked him, 'What sir, you have not done a movie for us!'

Ours is an artist's company, and we do movies with actors. If an actor wants to make a movie with us, we produce films.

I know there are many people who wanted to make movies with him but he called me. I would say God works in mysterious ways, and for me, my first God is Sivaji Ganesan, and he is up there doing good things for us. It has been a long time since you made a film.

Yes, it has been 12 years. Our last film Rajakumaran was made in 1992 with Prabhu. After that, we were concentrating on my father's health. He had a pacemaker so my time was spent on looking after him for five, six years.

After his death, we haven't done anything. We have not produced anything. Only now, I started the production of a Telugu serial.

Although Rajni and Kamal Haasan talk to me regularly, I never imagined we would be producing Rajni's next film.

By November, we will start shooting the film. We are aiming for an April 14 Tamil New Year's Day and Vishu release. It's the holiday season, always a good season to release films.

It's not a risk at all. A lot of people might not know Baba made more money than other Tamil films.

We are planning everything well. There are people who are already ready to buy our film. We have received such positive feedback from every quarter that I feel I have already made a good film. You won't believe so many people have offered poojas for the success of this film. I am receiving messages from not only Tamil Nadu but also from Karnataka, Kerala and the Middle East as well. The hype has created so much demand for the movie that every area, I have five offices now.

This is before I have started the business. In just two minutes, I can sell the film in each area. In 20 minutes, the whole business of the picture will be over. This is extraordinary. Can you imagine selling a movie in 20 minutes?

Is it the Rajni magic?

People say Baba was a debacle but people are coming back to buy his film. Everybody is so euphoric about the film. Last time when we did a Rajni film, there were two people for every area. Now, there are five people in every area.

Does the expectation put pressure on you?

I am very cool about everything. I am used to this kind of pressure. Having lived with Sivaji Ganesan, nothing pressurises you. His 200th film was Trisoolam. We had great pressure but the film did 200 days.

The pressure on me is to give a good product to the people, to his (Rajni) fans. I will see that I deliver a good product. My production quality will be very good, I can assure you that. It will be a stylishly made Rajni film.

Where will you shoot the film?

The film will be shot entirely in India. Rajnikanth is one person who prefers to shoot only in India. Thotta Tharani, our art director, is working, and soon, we will decide the location. It would mostly be in Chennai, Karnataka, Kerala, etc. In four months, we will finish shooting, by February 15.

Then we will need two months for post production. We have planned everything meticulously even though everything has to done in a very short time. And, we are famous for pampering all the artists.

It will be all that, and more.

I am very excited because I have never felt so euphoric in many years. I am enjoying the good vibes that is coming from all over!