Bride & Prejudice works, and how! 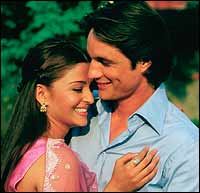 Bride And Prejudice can be summed up by an NRI guest's words at a wedding party when explaining his predilection for hip-hop but having to do the 'Indian dance with sticks.'

Mr Kohli, played to guffaw-provoking perfection by Nitin Ganatra, decides to fall back on the wise words of one of his idols, and quotes Gloria Estefan, 'In the end, the rhythm will get to you.'

The film opens in Amritsar, with a generic shot of lush green fields, comfortably at home in any Yash Chopra production. Then arrive the tourists, a pair of British-Indians, Balraj (Naveen Andrews) and Kiran (Indira Verma), for a friend's wedding. Not letting the photo-op go to waste, they drag along reticent Yank pal Will Darcy (Martin Henderson). The three go to the aforementioned wedding, and the boys (for they will be thus, inevitably) promptly fall in love at first sight.

The women responsible for this coronary mayhem are Jaya (Namrata Shirodkar) and Lalita (Aishwarya Rai) the eldest of the Bakshi sisters, gawking excitedly at the exotic new arrivals.

As a bewildered Darcy tries to comprehend the 'meaning' of the songs, Kiran takes over, and, in one of the highest points of the film, effortlessly translates them, ludicrously literally, not allowing ridiculous asides to get in the way of her practiced apathy and nonchalant subtitling. Fabulous.

Gurinder calls her film 'a British musical,' which is a dash misleading. Yes, people (all people!) do burst into song at the drop of a dupatta, but the entire effect is a lot more Alladin than Singing In The Rain, decidedly Disney, and certainly not Rodgers and Hammerstein.

It is wonderfully refreshing to see songs with dialogue, and marketplaces coming alive with Punjabi panache. The lyrics, for the most part, are fine if you listen indulgently, occasionally flashing into naïve risqué ('I want a man who gives something back,' sings Lalita, 'Who'll talk to me and not my rack!'), raising massively scandalised eyebrows across our audiences. 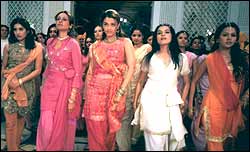 This is assuredly not a complex, character-establishing drama with subtexts. It is a fairy tale, predictable at every turn, free of possible twists, yet, to continue the Disney parallel, is immensely likeable. One of Gurinder's strengths in all her films has been the casting and developing of minor characters, screen-fillers given glorious quirks and wonderful idiosyncrasies.

Nadira Zaheer Babbar, as the admittedly gold-digging mother Mrs Bakshi, is an absolutely superb treat. Her flaw-ridden character laced with dollops of candour one can't help but love.

Indira Verma is fantastically condescending, with supremely sneering shadows of Julia-Louis Dreyfuss and Andie MacDowell visible in her as-clipped-as-can-be accent as well as her eyes and hair --a striking woman who owns every scene (sadly, few) where she is allowed to open her mouth.

Nitin Ganatra brings the slapstick among mostly well-reigned in performances, with his caricatured turn as the Green Card holding nincompoop. Naveen Andrews has precious little to do (except the enviable task of shimmying upto Namrata Shirodkar and waxing romantic). Daniel Gillies is positively Salmanic with his sixpack-showing ineffectual 'bounder' routine.

Aishwarya Rai cannot act, which is bloody unfortunate, considering that she's looking better than ever. The finest lines in the script, the repartees, fall flat as they exit Ms Rai's over-the-top face, and her Lalita comes across as an obnoxious girl falling prey to the very stereotypes she preaches incessantly against.

English is not her forte, ending up sounding stilted and contrived, something that would work in LA, as they would get something to affectionately titter and leer at simultaneously. She is an annoying little thing, and it's a tempting thought to imagine that bright red chunni getting caught on some fortuitous nail and tightening around that lovely neck. A visually sublime bimbette, she might just slot into Hollywood like Penelope Cruz began, or early-days Goldie Hawn. 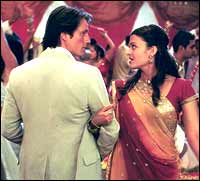 , works, and works with great flair. As several Bollywood references are reverentially scattered through (watch out for a terrific Prem Chopra bit!) this pastiche, it traverses through a vividly documented India-made-accessible (My Big Fat Indian Wedding, anyone?) and the story of a Knight in vanilla armour thudding the dhol for his Lady.

It is no small feat to adapt a Classic period novel, especially one that has already been etched and Colin-Firth'd in recent celluloid memory to decent success. But Gurinder succeeds, and how. She has taken Austen's dreary work and infused it, lovingly, with life, showing the Brits just what they've been missing, adding the curry to their chips.

What she has done is huge indeed, and a relief to students of English Literature weary with the period frustrations of Jane. Aishwarya Rai, leading lady, has not read the book. Now, thanks to Gurinder Chadha, you can skip the same.