Rani out, Konkana in 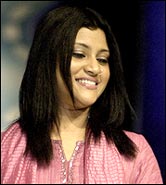 ira Nair has signed Konkona Sensharma to play the lead in her new film based on Pulitzer winning author Jhumpa Lahiri's book The Namesake.

Nair, who was in Kolkata last weekend to scout for locales and screentest actors, initially wanted Rani Mukerji in the title role. But Rani was unavailable due to date problems.

The shooting for the film will span Kolkata and New York, the two cities that the book traverses to portray the protagonist's struggle to come to terms with her expatriate existence and yearning for her roots.

Nair, who read The Namesake during the shooting of Vanity Fair, says she identified with the story because she herself felt torn between her roots and her expatriate life.

In all probability, the shooting will begin next month in Kolkata.

Nair has been scouting some city landmarks like the Howrah Bridge, Victoria Memorial, and a book market on College Street to decide on the locales. She has even visited a city studio for her indoor shots. The Kolkata shooting may last a month, including a few days of outdoors.

She also screentested other Bengali actors for other roles in the film.

Nair's Vanity Fair received mixed reviews in the US, but the director still hopes to get an Oscar nod.