He could embody the tall, dark, handsome Mills & Boon myth every girl dreams of.

Or he could be the chocolate-faced guy next door every girl wants to take home to her mother.

Either way, the hero has to possess a mix of smashing good looks and Greek God features to be a part of glamour-driven Bollywood.

Hence, it's no surprise when our actors spend long hours in beauty salons, enhancing their complexion and hair. They cannot afford a pimple on their nose now, can they?

Still, once in a while comes along an actor who doesn't meet the 'look' requirements. He may not have a perfect jawbone or a chin-cleft; his eyes may not be brandy-coloured; or his smile a killer. And yet he will make you swoon. Indeed, beauty lies in the eyes of the viewer.

Whether fitting the parameters of a traditional Hindi film hero or not, some actors turned out to be successful by creating an individualistic definition of good looks. Here's taking a look at the some of the Hindi film industry's charismatic men who made it not because of their looks but despite them: 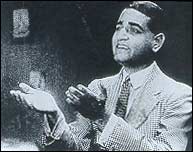 Kundan Lal Saigal: He wasn't a looker at all. In fact, he wore strange looking wigs to hide his balding pate. Yet, his enchanting voice and natural acting clicked in a big way with audiences of the 1930s and 1940s. Today, he is an icon for the unconventional.

Bhagwan: This pudgy, baby-faced, short actor was no Don Juan De Marco. But it was this very oddball aura that made him special. His ability to keep the audience in splits non-stop made him a major star of the black and white era of films.

Kishore Kumar: How do you describe him? One look at him says he's just another guy. Another look shows a smiling, vibrant man with an incredible sense of humour and an inherent singing talent. 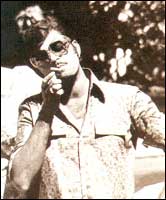 Rajendra Kumar: Hits, hits and more hits. Rajendra Kumar bore the enviable tag of 'Jubilee Kumar'. He may not have had a face that would launch a thousand ships, but his righteous demeanour and teary-eyed disposition was eagerly lapped up by audiences, resulting in big box-office bucks.

Amitabh Bachchan: Tall, dark and handsome or lanky and awkward? (Remember Bansi and Birju?) His looks didn't belong to the love-at-first-sight category.

The poetic intelligence sparkling through his eyes, the overwhelming command in his voice and a shy smile, speaking the language of serenity, were his biggest assets. Not to mention his 'angry young man' long legs. Sixty plus now, his eyes still sparkle, his voice still commands, his smile still speaks.

Shatrughan Sinha: If you don't have the looks, make up for it with huge doses of attitude. That's Shotgun for you. The scar-faced actor began his innings as a brazen bad boy. Even after he turned a new leaf, the brash and mischievously witty aspect of his personality remained his popular trademark. 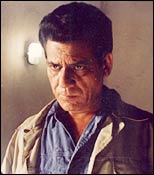 Om Puri: Not all scars are ugly. The pockmarks on Om's face became a defining feature of his intense personality. Irrespective of his strikingly unusual looks, the actor emerged successful with his unquestionable acting skills and infectious grin.

Naseeruddin Shah: His face gathers mysterious emotions that appear to be a strange mix of the eccentric and intellectual. And then the camera rolls, and those emotions go through an unpredictable twist. The outcome: a fabulous performer.

Amol Palekar: He could be the guy sitting next to you in a crowded railway compartment.

Palekar's biggest advantage was his great accessibility to the common man. He expressed their day-to-day woes and heartbreaks without going over the top. His conviction was understated and realistic. And the common man just adored him for that. 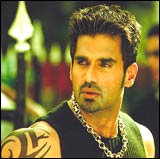 Ajay Devgan: When he entered the film industry, Devgan was labelled a poor man's Sunil Dutt.

He was never a glossy's favourite cover, or pin-up material. And yet he's a major star in his own right. His fan following is of the loyal I-love-his-versatile-acting and not the ever-changing Oh-he-is-so-cute tribe.

Suniel Shetty: He didn't look like a traditional hero. His acting skills left a lot to be desired.

When Suniel Shetty made his debut, he had only one thing going for him: his terrific physique. Like a true-blue businessman, which he is, Shetty marketed himself on the force of his biceps. His strategy worked and earned him the 'action hero' image. Gradually, from a 'non-actor', Shetty went on to receive a Filmfare trophy for best actor in a negative role (Dhadkan).

Manoj Bajpai: Manoj Bajpai is a picture of confidence. He knows he has it in him to make the audience take him seriously. So even though the movie revolved around Satya, it was Bhiku Mhatre who walked away with all the recognition. And even if Zubeidaa was Karisma Kapoor's movie all the way, you could not dare to overlook Bajpai's dignified and duty bound prince, despite the accent pitfalls.