What does one write about the great Mohammed Rafi?

I run the risk of penning meaningless platitudes in an attempt to do so. His mellifluous voice worked wonders for many songs and for more than 30 years. His playback singing enhanced the careers of many a star like Shammi Kapoor, Rajendra Kumar, and Biswajeet, to name only a few.

Rafi's ability to generate the complete range of emotions and draw the listener into the song, mood, and character remains unsurpassed. All of this was accomplished without resorting to antics like yodelling.

Mukesh had the pathos. Talat Mehmood had the delicate tremor. Kishore Kumar had zany songs as well as gravitas. Rafi had all of the above plus an extra something, or, as the French would put it, je ne sais quois.

This effortlessness is perhaps his unique quality. Other than heavy classical songs, I have not heard a Rafi song where he struggles through an octave or to convey the nuance of the song exactly as intended by the lyricist. Indeed, there isn't a genre of Hindi film music that is not embellished by him.

The 1950s and early1960s were unquestionably the golden age of Hindi film music. The 1950s particularly so because of the simplicity, lightness, and melody of the compositions. Diverse composers like Shankar-Jaikishen, S D Burman, C Ramchandra, Anil Biswas, Sajjad Hussain, Madan Mohan, and Naushad infused a sense of variety into the music.

There were great lyrics for composers to work on. The stars of Hindi cinema stayed at their peak till about the mid- to late-1960s. Therefore, it isn't surprising that Rafi's golden age lasted till the replacement of melody by rhythm or the decline of fine composers and actors for whom Rafi sang, such as Rajendra Kumar, Shammi Kapoor, and Dev Anand.

The Kishore Kumar-Rajesh Khanna combination took the industry by storm with Aradhana. This pushed Rafi into the back row. But he delivered a few hits in the 1970s with songs for Laila-Majnu, Amar Akbar Anthony, Sargam, and Karz.

Some readers may be surprised to find Dev Anand mentioned above. The popular mythology of Hindi cinema puts forth the view that Kishore Kumar was the voice of Dev Anand. This is disputable. Rafi's songs for Dev Anand in movies like Nau Do Gyarah, CID, Jab Pyar Kisise Hota Hai, Asli Naqli, Love Marriage, Gambler, Hum Dono, Kala Bazaar, Kala Paani, Tere Ghar Ke Saamne and Guide are of extremely high quality.

Guide, in fact, is a very interesting example from the point of view of comparing Kishore Kumar and Rafi's singing for Dev Anand. If Kishore had a Gata rahe mera dil, Rafi had three solos: Din dhal jaye, Tere mere sapne, and Kya se kya ho gaya. It is interesting to note that S D Burman chose Rafi for three pivotal songs in the movie, which have a heavy dose of pathos and drama.

I became a devoted Rafi fan quite by accident. I was in class VII. My father bought a new Philips cassette player. My brother was already a Rafi admirer. He bought an HMV cassette with Rafi's solos. At that time, I was fascinated by Kishore Kumar's yodelling and his songs for Rajesh Khanna and Amitabh Bachchan. But my fascination for Kishore diminished quite rapidly as I listed to Rafi gems like Aise toh na dekho (Teen Deviyan, S D Burman), Aaye bahar (Rajhath, Shankar-Jaikishen), Hai duniya usiki (Kashmir Ki Kali, O P Nayyar).

Making a list of Rafi's songs is no easy task. There are literally hundreds of songs of his that I adore. But years of being a hardcore Rafi fan helped me to discover some real gems in his large body of work that are not often heard, yet showcase his remarkable talent and are of exquisite quality.

Here are a few:

For the purists, Mohammed Rafi may not have been the most technically gifted singer. Indeed, many talk about Talat Mehmood, Mukesh, and even Kishore Kumar as better singers than Rafi. Without denigrating these other greats, I would invite fellow fans of Hindi cine music to rediscover Rafi's versatility.

For fans of Kishore's energetic and bubbly songs, I present a fitting riposte by Rafi. Lal lal gaal from Mr X, and She ne khela he se aaj cricket match, the crazy cricket number from Love Marriage.

For admirers of Talat Mehmood's dulcet voice, I present Meri mehboob from Ghazal and the beautifully picturised Apni to har aah from Kala Bazaar. 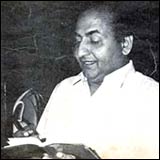 Listen to Rafi as he matches Mukesh's pathos in Gham-e-hasti from Vallah Kya Baat Hai and Jinhe naaz hai from Pyaasa.

During my early years, listening to Chhayageet, Aap Ki Farmaish and Bela Ke Phool every evening on Vividh Bharati was like a religious ritual. Listening to radio has perhaps nurtured several generations of Hindi film music buffs. The present generation, however, seems to prefer remixes.

On July 31, 1980, Rafi passed on, leaving behind thousands of songs and millions of mourning listeners. Perhaps the coming generations will appreciate and savour the richness of his music for years to come.

There will never be another Mohammed Rafi. His song in Dil Ek Mandir says it all: Jaane waale kabhi nahi aate. Jaane wale ki yaad aati hai. [Those who go away never return. But their memory stays with us forever.]