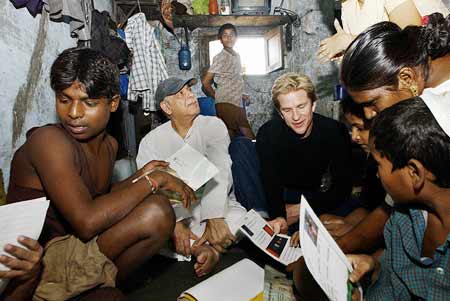 The first time he heard about India was from his grandmother who had come to the country for spiritual solace in the 1940s.

Decades later, when Ismail Merchant offered Matthew Modine a chance to visit Mumbai for the premiere show of Le Divorce, the actor took it up eagerly. He wanted to know more about India.

Modine was in India to promote Merchant's latest film, Le Divorce, that releases in the first week of February in Mumbai. He plays a tell-man.

On his week-long trip, Modine walked across the streets of Colaba, took a ferry to the Elephanta caves and, before departing to New York, he visited Dharavi, Asia's largest slum, to interact with kids.

There was so much suffering in Dharavi. Yet, people lived with joy. The children wore smiles on their faces. When I go back to the US, I want to do something for those kids. I will try and arrange for some funds so they can have better education.

I was really touched. Wherever I went, people welcomed me with open arms.

The first time I heard about India was through my grandmother. She was depressed way back in 1945. She wanted some spiritual solace, and therefore she visited India that year. She was very happy to be in this country.

I can't quite recall the places she visited -- it was so long ago. She spoke to me about her visit when I was a teenager. I am just happy to be here. Even I feel spiritually motivated and want to learn more about this country.

Le Divorce is about two American girls, Kate Hudson and Naomi Watts, caught in Paris in a comedy of errors. It is adapted Diane Johnson's book of the same name.

Ismail took me to the IMAX Adlabs multiplex [India's first I-Max theatre] at Wadala. I did not believe such places existed in India. The theatre looked so very America -- I felt I was in America. And the only time I realise I am not, is when I saw dosas and Indian food being served in the stalls.

Many people ask me whether I felt bad passing over Tom Cruise's role in Top Gun. I can only do films I can relate to. I work in films that appeal to me just like [Stanley Kubrick's] Full Metal Jacket. My sister and two brothers had participated in the Vietnam War. So I was curious to act in Full Metal Jacket because it deals with the Vietnam war. So I don't regret the role in Top Gun because I could not relate to that role. 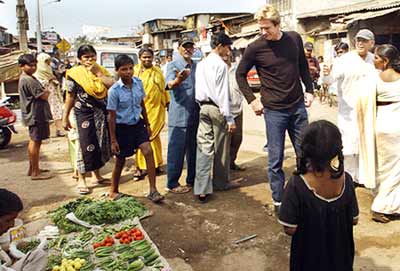 Also, I have always wondered why we need war. Why not use an [intelligent] forum [like the movies] to solve a dispute or a problem?

What is happening in Iraq can be summed up in one word: oil. I am not a politician nor am I an intellectual, but I think that is the only reason. We all are addicted to oil in spite of the fact that there are other modes of energy production available. We are like drug addicts hooked on heroin.

One thing I have not watched is Hindi movies. I know they are popular in India. I plan to take a lot of DVDs and VCDs of Indian films with me back to the US.