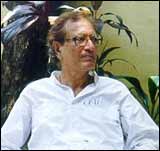 Filmmaker Vijay Anand, who suffered a massive heart attack on Sunday, died this morning. He was 71.

The former censor board chairman had been admitted to Mumbai's Lilavati Hospital at 1355 IST.

Goldie was the youngest of the four Anand siblings and took up to films after his elder brothers, Chetan and Dev Anand.

His acting skills came through when he starred in films like Kala Bazaar, Double Cross, Haqueeqat, Barood Road, Main Tulsi Tere Aangan Ki and Hum Rahe Na Hum. He had also planned an ambitious project to launch a television channel, Lamhas, which would produce quality programmes.

Goldie had resigned from the Censor Board due to a difference of opinion over the censorship issue.

More Features
Source: PTI© Copyright 2021 PTI. All rights reserved. Republication or redistribution of PTI content, including by framing or similar means, is expressly prohibited without the prior written consent.
COMMENT
Print this article