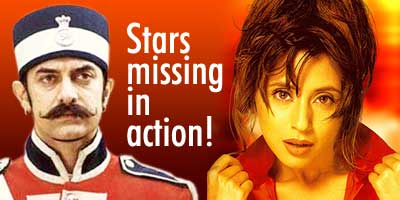 Urmila Matondkar ruled the roost last year with a hit, Bhoot, and the critically acclaimed Pinjar.

But 2004 rarely saw the actress, except in Ek Hasina Thi.

Aamir Khan may have been in the news thanks to his love life and coke 'n' watch commercials but he has not had a release since July 2001!

And let us not even get started on our favourite married heroines, Kajol, Madhuri Dixit, Karisma Kapoor

Which actor do you think you haven't seen enough of this year? Tell us! We would love to hear from you!