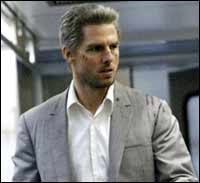 Audiences are deserting The Village.

M Night Shyamalan's suspense yarn -- which was widely panned by critics -- fell from the top to the second position at the US box office this week.

Its earnings fell by about 67 percent.

Though the film grossed about $85 million in 10 days and is headed for a profitable run, it may be the least profitable of the Pondicherry-born Shyamalan's four hits.

His previous film Signs fell by about 50 percent in the second week and ended with $240 million.

But The Village, which received far more negative reviews than his other films and grumbling from the audiences that Shyamalan had taken them on a wild ride, could earn about $120 million in North America.

Part of the reason for the steep fall is the good $24 million opening for Collateral, the week's most popular film.

The crime drama, which has a sensational performance by Jamie Foxx and an arresting presence by Tom Cruise (above, left) in a villainish role, garnered some of the strongest reviews so far this year. But it was no match for the $50 million opening The Bourne Supremacy and The Village each enjoyed.

Though Cruise is a big star in America, his popularity abroad far outweighs his domestic status.

While his The Last Samurai grossed about $120 million in America, it earned over $300 million abroad and became one of the most profitable films last year.

The Matt Damon starrer The Bourne Supremacy, the third highest grossing film of the week, is confidently headed for a $150 million gross.

But the much darker and more enigmatic The Manchurian Candidate does not have a wide mass base. It fell by about 48 percent in its second week to fourth place on the chart. It will have to fight hard to reach at least $73 million, the gross for its star Denzel Washington's previous success, Man On Fire.

The romantic drama with a dark edge, The Little Black Book, which was slammed by most major critics, opened at fifth spot with a modest $7 million. The $30 million film, in which Brittany Murphy plays a young woman who raids her boyfriend's Palm Pilot to satisfy her curiosity about his past romantic conquests, is certainly going to be a disappointment to its producers. But it is not a big loser like Catwoman and other recent big budget turkeys.

It was followed by the hit I, Robot, now heading towards $140 million.

The comedy Harold And Kumar Go To Whitecastle lost about 45 percent of its box-office clout, but the $9 million comedy is heading for a $20 million gross. Though its earning is far removed from the money most teen comedies make, the film could still become profitable if it has a healthy run aboard -- not to forget video and DVD sales.

This year has been notable for the number of small budget films (ranging from $9 million to $30 million) that have done solid business.

The Warner Bros comedy A Cinderella Story continues its magic at the box office with a $47 million harvest in just four weeks. The film could end its run with a healthy $60 million.

Two other smaller films, which are not on the top 10 list any more, are still drawing thousands of people. The Michael Moore docudrama Fahrenheit 9/11 is 11th with an amazing $113 million gross in seven weeks. The tearjerker The Notebook has made an impressive $72 million, also in seven weeks.

The box office this week: