Sex, extramarital affairs and homosexuality are the flavour of the season at the box office.

Masti, this Friday's release, has liberal doses of all three. They are the pegs that the movie hangs on.

Three friends meet after three years. Only now, they are married and harassed by their wives.

Meeth (Vivek Oberoi), Amar (Ritesh Deshmukh) and Prem (Aftab Shivdasani), after marriage, discover that marital life is no bliss. Meeth has to reckon with a wife who calls every half an hour to check on him because she misses him every
moment. Amar has a mother-in-law and wife team who are great fans of WWF and continually harass him. Prem's wife is so religious that she has no time for him.

Exasperated, the trio decide that an extramarital affair or some masti is the only way to add some spice to their lives.

Enter Lara Dutta as Monica, who strings the three along, only to blackmail them. But Monica is soon murdered and the three become suspects in the case being handled by tough cop Sikander (Ajay Devgan).

The first half of Masti deals with adultery and post interval, the film gets into a whodunit phase.

Written by Milap Zaveri and Tushar Hiranandani, Masti is hilarious in most parts. But, make no mistake, it is no intelligent comedy.

Given the film's positioning as a sex comedy, Masti works. The dialogues are hilarious and so is the comedy. It is also not crude or vulgar. It has jokes, of the colloquially termed 'non-vegetarian' variety, and it is fun.

Masti also works because the three actors, Vivek Oberoi, Ritesh Deshmukh and Aftab Shivdasani, show great comic timing, both individually and as a trio. They manage to contort their faces into the right expressions and a good
background score helps their cause.

Ritesh Deshmukh, in a scene, manages to do a fair job of imitating Jim Carrey. With Masti, he shows a sense of comedy and his boy-next-door look works for him very well.

Aftab Shivdasani too is good as the man stuck with an overtly religious wife. He doesn't go over the top and manages to keep his comic timing intact.

Vivek Oberoi pales in comparison to the rest. Maybe it is because of the expectations that ride on him post Company and Saathiya. In Masti, he seems almost ordinary and rather disappointing for the seeming lack of effort in his role.

The rest of the cast delivers too. It is one of the reasons why the comedy works. Lara Dutta, in a rather small part despite being heavily seen in the promos and posters of the movie, and Ajay Devgan play their characters well.

Satish Shah is the scene-stealer. As a doctor who suspects the trio to be homosexual, Shah enacts his part with flair and his scenes are sure to have the audience in splits.

All of this works, only because director Indra Kumar has weaved the story, the dialogues and the scenes well without letting the show get crass or crude. 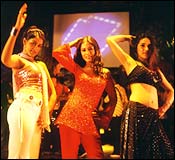 Indra Kumar, may be better remembered as the director of serious dramas like Dil and Beta. With Masti, he turns to comedy and does a rather decent job of it, if you overlook the double entendres and the liberal doses of slapstick.

It has loads of innuendoes and double entendres in its dialogues, some of which can at times get a little too much, and make you go, "Gawd!"

Like the repeated references to the wife as ghar ki daal and the mistress as biryani. Even there, it is split into categories like special chicken biryani and restaurant ka khana and its likes.

As with most Indian comedy films where hamming is the mainstay, the acting can be a bit over the top.

If you like clean, family entertainers, this is clearly not the movie for you. For those who do make it to the film, there are parts when the song and dance gets a little too much to bear.

Music is definitely not the high point of the film. While the title song Masti and Chain khuli ki are fun numbers to hear, the others are a huge drag on the movie and can make you shifty.

The Bottom Line: Should you watch it?

If you like a little spice in your jokes, don't mind gags on homosexuality and are in the mood for some 'non-vegetarian' stuff, then go for it.

Masti is guaranteed to give you a few laughs and good 'timepass'.