Bollywood's blue-eyed girl Karisma Kapoor has tied the knot with Sunjay Kapur. The wedding ceremony, which was to take place at 11 am, was delayed because the groom was stuck in traffic. Sunjay arrived at the venue at 12.45 pm and rushed inside the cottage's gates. He was dressed in a cream sherwani and wore a gold sehra. The pheras finally took place at 1 am in the presence of both families.

For those of you who came in late, Sunjay is the brother of Superna Motwane and Mandira Kapur, Karisma's old friends. Their late grandfather Raunaq Singh set up the Apollo Tyres empire. Sunjay is Managing Director, Sona Koya Steering, part of the Sona Group which his father Surinder Kapur runs.

In typical Kapoor tradition, Karisma was married at her grandfather, the late Raj Kapoor's home, R K Cottage. The couple opted for an hour-long Sikh ceremony.

At around noon, Karisma's family and friends were still busy with pre-wedding ceremonies. Both the bride's sister Kareena and her aunt Reema Jain were spotted supervising last minute preparations, according to the television channel Aaj Tak. rediff.com could hear strains of the shehnai wafting though the air.

Outside the cottage, the scene was both crowded and confused. Curious onlookers were milling around, hoping to catch a glimpse of their favourites stars. Journalists, photographers and camera crews had stationed themselves outside the gates of the cottage. A phalanx of policemen were doing their best to manage the crowds and the ensuing traffic jam.

Because of the crowds, no member of the R K family was present at the gates to welcome the groom and his family.

Among the guests who drove in were her uncle Rishi Kapoor, actor Sanjay Kapoor who will reportedly play the brother's part at the ceremony, designer Manish Malhotra, granduncles Shashi and Shammi Kapoor, filmmaker Bharat Shah, cricketer Mohammad Azharuddin and his wife Sangeeta Bijlani, Karisma's costar in many films, Govinda and Rahul and Akshaye Khanna. Manish Malhotra has designed Karisma's trousseau.

According to a local newspaper, the house was decorated with flowers. The garden that surrounded the house had been turned into a Sheesh Mahal that could accommodate 600 guests.

The guests were to be offered non-alcoholic drinks and vegetarian starters until the wedding ceremony was completed. Karisma's father Randhir, according to reports, opened a champagne bottle after the wedding, after which the well-stocked bar was be thrown open to the guests. An elaborate lunch was be served.

The newly-weds will leave for a European honeymoon on Tuesday. 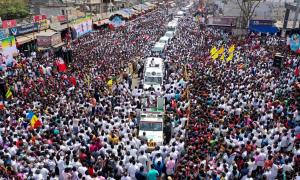