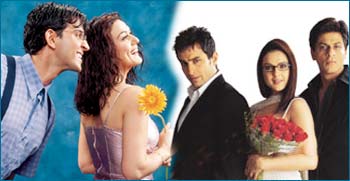 Many people called Hrithik Roshan a one-film wonder after the man who achieved superstardom with his debut movie, Kaho Naa... Pyaar Hai, began delivering one flop after another subsequently.

But papa Rakesh Roshan rekindled his son's career with another superhit, Koi... Mil Gaya. The film went on to become the biggest grosser of 2003, at least so far.

Give us your opinion. We would love to hear from you!