Neither Kamal Haasan nor Madhavan knew they would hit it off with the other when they decided to share screen space for C Sunder's Anbesivam. The Tamil releases January 14. 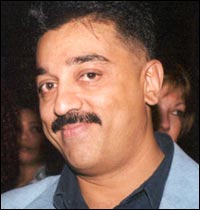 But for the two actors, the experience has been delightful, they tell Subhash K Jha:

How was the experience of working together?

M: I learnt what NOT to do before the camera. I became fond not just of Kamalji but of the character he played in Anbesivam. I'll miss them both.

I had so much fun I didn't know when Anbesivam started and when it ended. Kamalji isn't just a brilliant actor, he is a phenomenon that defies analysis. He guided me through my scenes so that I was never afraid of going overboard or underboard. He explained the intricacies of my character in such detail. This was something I had never experienced before.

Since Kamalji wrote Anbesivam, he was very clear about the equation between the two characters. The way he struck a balance between them is awesome.

KH: It is common etiquette to say I enjoyed working with a costar. But then so is 'How are you?' So thank you for asking (laughs). Very rarely do I get such happy vibes working with a co-actor.

Everyone was scared to work with Sivajisaab (Sivaji Ganesan). But I really enjoyed working with him. It was like interacting with my father.

Later, I enjoyed working with Rishi Kapoor in Ramesh Sippy's Sagar. I don't know whether he felt equally good about me. The way Rishi Kapoor and I shared the screen was amazing. He would simply stand back and let me do my scenes. He is not an insecure actor.

I wanted to behave the same way he did when I had the chance to work with a junior actor. I hope I did that with Madhavan. What others see as a vice in Madhavan is a virtue for me. They complain about his enthusiasm. Like me, he goes beyond the call of duty without an ego. We both want ourselves and the film to look good.

That is why I have now signed him for my own production Nala Damyanti.

What an experience it was shooting Anbesivam! As an actor I had no time to lean back and bond with Madhavan. We only spoke during lunch. But Madhavan didn't mind. He was forever enthused in a way I see lacking in other actors. This man has the same concentration on and around the camera as me.

Madhavan, weren't you afraid of being overshadowed?

M: Everyone told me Kamalji would hog the limelight. I think that is so unfair. First of all, you have to be an actor of some calibre to stand up with him in the same frame. Second, why would he want to overshadow any other actor when he is the best in the country?

In Anbesivam, I don't get to dance around with women as I usually do. I get to sing and dance with Kamalji. I was nervous doing it -- Kamlaji is mesmerising in songs. And I didn't want to let my character down. I somehow managed.

Describe some of the more memorable experiences during Anbesivam.

M: I remember Kamalji narrated a script to me (which I am now doing for his production house). He had read my part and asked me to react from the girl's viewpoint. We jammed for hours.

Kamalji and I share an uncanny ability of smelling out snakes. Once, we were driving to the airport when we suddenly stopped mid-conversation, simultaneously opened the windows and said, "Can you smell it?" The only other person Kamalji knows with this ability is his daughter.

The locations were fairly deserted, so we were left to ourselves to do scenes the way we wanted. One day when the dialogues weren't ready Kamalji cancelled the shoot. I thoroughly approve of this attitude. The only way to make films is to be fully prepared.

KH: Do you know, nobody understood the concept in the first schedule? That exasperated me. Fortunately, this is not a mega-budget film -- I'm not the producer -- but it will be memorable.

I also want to dispel the myth that Kamal Haasan likes to spend money unnecessarily on a film. The money on Anbesivam is well spent. Except for an expensive train accident and bus accident, we shot the film on a restricted budget.

I like rehearsing a lot. Actors who pretend to be the best in their first take are just being lazy. It is like a writer saying the first draft is the best. I could still make all my films from Hey! Ram to Chachi 420 better. Unfortunately, p 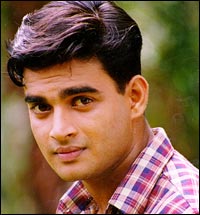 eople get tired shooting. Not Madhavan.

What do you play?

KH: One of the leads. You want more? I play a man called Nala Sivum. He's a street theatre man with unionist leanings. He comes in contact with an ad filmmaker, Madhavan, a tool of globalisation. We become strange bedfellows. My role is special because it is simple. I don't play Rain Man or Forrest Gump. I play a simple man with an innate wisdom who becomes a temporary guru for his yuppie cotraveller.

Madhavan is also streetsmart. But his street is Wall Street. Our journey is like the Bharat Darshan undertaken by newly qualified IAS officers.

M: I play a yuppie guy who hasn't lost contact with his roots. Kamalji's character teaches me to look life squarely in the face.

Besides an extraordinary performance, Kamalji has contributed considerably to the music. He has sung two songs which would put professional singers to shame. To sound 22 at 47 is phenomenal.

KH: When composer Vidya Sagar composed the title song, I told Madhavan the situation in the film. I wanted it to sound like a man who didn't sing for an audience but for himself. Madhavan said I should sing it. So did the composer.

Meanwhile, Madhavan is all set to remake the television serial that made him a household name years ago. He played the Tamilan son-in-law of the Punjabi Satish Shah in the sitcom Ghar Jamai.

He says, "This year, I plan to produce the film and get Anant Mahadevan who directed the serial, to direct the film in Tamil. Anant and I recently came together for the Hindi film Dil Vil Pyar Vyar."

The film failed, and Madhavan says he has no intentions of signing any film in Hindi unless the role excites him. He was recently approached by Farhan Akhtar for a role in his war epic Lakshya. "But with Amitji and Hrithik Roshan around, I wondered how much of a role I would have in Lakshya. If I work with in a multi-hero film with Farhan, I would want to do a Dil Chahta Hai."

Madhavan was also a hair's breadth away being signed by Ashutosh Gowariker for his new project Swades. But the role went to Shah Rukh Khan.