How to make money when RBI cuts interest rates

Changes in interest rates can mean big opportunities for astute investors. The secret is to time your investments with a falling interest rates situation, which leads to rise in prices of bonds and bond funds.

Even otherwise, through falling interest rate and rising interest rate periods, during the 8-year period between 2000 and 2008, for example, bonds offered Indian investors an annually compounded return of 9 per cent plus.

During periods when interest rates were falling, for example in 2001 and 2002, annual returns from debt instruments rose to equity-like levels of 20 per cent plus.

Most recently, the Reserve Bank of India started cutting interest rates in the later part of 2008, and debt funds have given a return of 20 per cent plus in the last 6 months. With overwhelming worries of recession, even deflation, God forbid (!) continuing, most economists expect continuous lowering of interest rates for several months to come.

If this were to pan out, there remain opportunities for making smart profits during 2009 by investing in longer-maturity bond funds, including gilt funds.

To find out how and why changes in interest rates impact fixed income investments, read on . . .

Therefore, an investor has to assess the probability of different interest rate-change scenarios. Obviously, it would be foolish to invest in long-term fixed income securities with a stated interest rate of 5 per cent if interest rates had a 70 per cent chance of rising over the next several years to 7 per cent or higher.

Longer-term bonds rise the most when interest rate falls

The degree of interest risk you assume and, equally, the degree of return you can expect, in fixed income investing is closely tied to the time horizon of the instrument concerned.

That's why longer-term investments typically pay higher yields, to compensate the investor for the additional risk he or she takes on (See Figure 1: Interest Rate / Risk Relationship). Normally, the longer the investment horizon, the higher the interest rate risk, or return, associated with it. 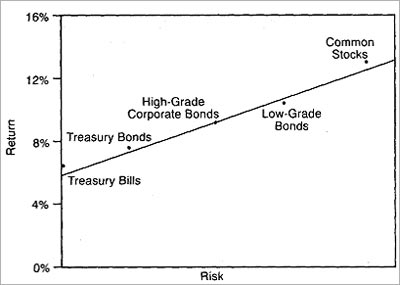 This is true because the longer you hold a fixed income investment, the greater the possibility of interest rate fluctuations, resulting in changes of the fixed income security's value and price in the secondary market where it trades.

Therefore, the closer your security gets to maturity, the less it will be affected by changing market interest rates.

What the yield curve tells you

Sometimes, however, abnormal conditions in the economic environment can result in short-term interest rates rising above that offered by long-term fixed income investments. The result is a negative yield curve.

Since treasury issues are considered top investment quality with the least risk of default, other fixed-income investments must pay a premium in the form of higher interest rates in order to attract investors away from the more secure treasuries.

The degree of credit risk, and therefore the level of interest rates paid on specific fixed-income investments, is based on an analysis of the issuer's ability to repay the debt on time.

These are evidenced in the credit ratings provided by such credit rating firms as Fitch Investors Service, Moody's Investor Service, and Standard & Poor's Corporation. Generally, the lower the credit rating, the higher the required interest rate to compensate investors for the additional risk.

How the yield curve can forecast interest rate movements

According to this strategy, the yield spread between the shortest and longest maturities can signal the degree of investor demand for both short- and long-term investments. The wider the spread, the more investors anticipate a reduction in market interest rates -- and vice versa. 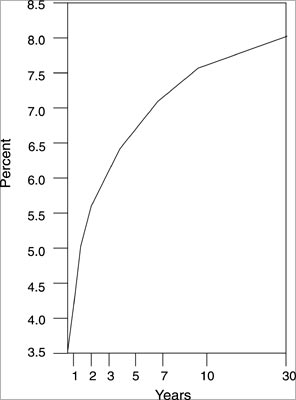 The steepness of the yield curve also provides some clues. The steeper the yield curve, the easier it is for investors to increase yields substantially by moving from short- to intermediate-term investments. (See Figure 2, US Treasury Yield Curve.)

With a steep yield curve as indicated in Figure 3, an investor can move up 2-¾ percentage points, a nearly 70 per cent jump from 4 per cent to 6-¾ per cent, by extending maturities from two years to five years.

The risk lies in the proper assessment that market interest rates will rise during the investment period, more than offsetting the additional gain in yield.

In addition to their impact on fixed-income investments, interest rate changes also impact stocks since they alter the cost, and often, the ability, to finance a business's ongoing operations, expansions and acquisitions.