Sign in  |  Create a Rediffmail account
Rediff.com  » Business » A solar powered bra that can charge a phone!

A solar powered bra that can charge a phone! 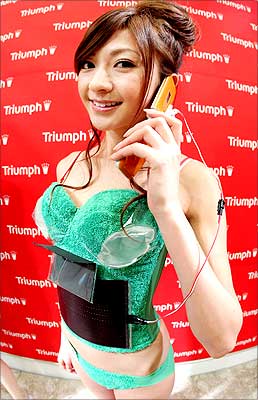 Lingerie maker Triumph International, Japan, on Wednesday unveiled a 'solar powered bra' that can generate enough power to charge a cell phone or an iPod.

The environmentally friendly, green-coloured bra sports a solar panel that can be worn around the stomach.

The bra is equipped with a solar panel which generates electricity using sunlight and distributes it to various types of electrical devices when the power cable is connected.

The bra was revealed prior to the 2008 G8 Hokkaido Toyoko Summit that will address environmental issues.

The bra, Hhwever, will not be available to customers just yet.