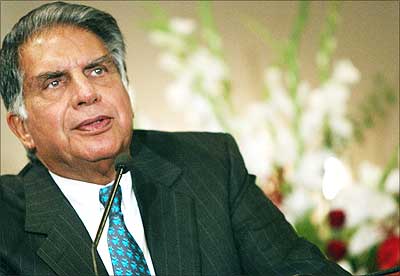 With a bid of 608 pence a share, Indian corporate giant Tata Steel outsmarted CSN's 603 pence a share offer during the night-long auction process.

Brazil's CSN pulled out of race after raising its bid to 603 pence a share.

CSN officials confirmed pulling out of the race to acquire Europe's second-largest steel firm after a final offer of 603 pence a share. Tata officials remained tightlipped.

Announcing the auction outcome, the UK Takeover Panel said Tata Steel bid 608 pence a share in cash as against CSN's 603 pence a share.

"This auction procedure has now completed," the Panel said in an e-mailed statement.

The takeover marks the largest acquisition by an Indian company and would propel the combined entity led by Tata Steel to the fifth rank in steel output in the world.

Under the auction norms, each suitor was required to raise bids by a minimum of five pence per share.

With this win, Tata Steel has now entered the big league of the global steel industry. Tata-Corus would have a combined production of more than 23 million tonnes.

Currently, Arcelor-Mittal is the world's largest company in this space, followed by Japan's Nippon Steel and South Korea's Posco.

The Corus acquisition would also help Tata Steel to be a 40 million tonne per year entity by 2012.