The Indian Institute of Management-Bangalore has broken all records and beaten the other IIMs by getting the highest pay packet for an individual student in the annual placements.

At the end of 'slot zero,' Gaurav Agarwal of Kanpur has secured placement from Barclays Capital with an annual salary of $193,000 (about Rs 86 lakh), thereby breaking the record of $185,000 secured by a graduate from IIM-Ahmedabad just two days ago.

Gaurav Agarwal will be posted in London. Another student, Venkatesh Shankararaman, got a package of Rs 30 lakh, the highest offer for a domestic position, in Mumbai. Agarwal, an IIT Kanpur alumnus, had done his summer internship with Barclays. Prior to joining the IIM-B, Agarwal was working with a network chip-design company, Tera Blaze, at the Silicon Valley, USA.

On the other hand, a B-Tech graduate from IIT-Madras, Venkatesh Shankararaman did his post-graduate in science from Ohio State University and worked with i2 Technologies in the US.

"The numbers speak for the quality of students. The students were brilliant and we have recruited the highest number of candidates from here, among the three campuses," said Vikash Daga of McKinsey.

As many as 182 students signed up for the process and by the end of "Day Zero", 65 of them, comprising 34 per cent of the batch, were placed.

McKinsey has taken nine recruits from the IIM-B, the highest among all IIMs this year.

The IIM-B's growing reputation of producing specialist students was underlined by the presence of private equity firms like Baring Private Equity Partners, news giant Bloomberg (New York) and conglomerates like British Petroleum (Singapore) and Mittal Steel. Last year, 78 companies had together made 328 offers at IIM-B.

Indian companies began their recruitment on Sunday, the first day of the recruitment process, wherein the activity focused on students interested in marketing, retail banking, IT services and consulting. The line-up includes FMCG behemoths like HLL, P&G, banking giants like Kotak and Citibank, and consultants like Accenture and KPMG joining the parade. The process will go on till mid-night.

Amid this shower of lucrative offers, one student, Kunal Mahipal of Kolkata, has opted out of the placements and has decided to start his own business. He did his BCom degree from Xavier's College, Kolkata.

His aim is to make it big in the branded garments industry. His company, Kriti, will focus on designer wear for men, women and kids. He has already managed to arrange 30 per cent of the capital from his partner. He plans to approach venture capital funds for the rest of the investment.

A student of XLRI Jamshedpur has bagged highest salary offer of Rs 13 lakh (Rs 1.3 million) per annum from McKinsey in its placement for 2006 batch.

More than 25 students were offered salaries above Rs 10 lakh p.a.

The average salary offered to 186 students, both from the Business Management (BM) and Personnel Management & Industrial Relations (PM&IR) courses was around Rs 8.4 lakh pa, 13.51 per cent higher that last year's average of Rs 7.4 lakh p.a.

Capgemini Consulting, KPMG Consulting, SAP America, Nokia, Oracle and Virtusa were few among the nine new entrants for the placement 2006.

Around 27 per cent students signed out with offers from FMCG and manufacturing firms. The banking, finance and insurance sector has been the favourite sector amongst the students. Around 26 per cent of the students opted for offers in these sectors. Another 21 per cent opted for consulting firms.

Do you want to discuss stock tips? Do you know a hot one? Join the Stock Market Discussion Group. 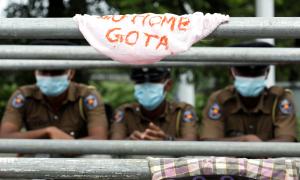 Sri Lanka on the boil as protests enter 50th day