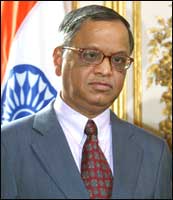 The stock prices of leading Indian tech companies have been battered in recent weeks. Investors are skittish over rising inflation and higher interest rates that could tap the brakes on growth globally. But there's no sign India's companies themselves are losing strength.

Indeed, Infosys Technologies, Tata Consultancy Services, Wipro, and others continue to disrupt the $600 billion global tech-services industry. Infosys said on April 14 that per-share earnings in the current quarter would rise as much as 27% on a sales increase of as much as 33%.

With that as a backdrop, N R Narayana Murthy, the founder and longtime chairman of Infosys, stopped in New York on June 15 on something of a farewell tour. After 25 years at the helm, he's stepping out of his executive role and handing the baton to the next generation of leaders.

You started Infosys and built it to what it is today. Why have you decided to retire from your role as executive chairman?

I set the rule that we should all retire at 60 so we can give opportunities to younger people to play a role in shaping the future of the company. I believe in the power and importance of youth. I gave up my CEO position four years ago so Nandan Nilekani could become the CEO. He will continue in the CEO role.

When you look back on the early formative days of the company, did you ever imagine that Infosys would become such an important company in the worldwide tech industry?

However, we were certain of one thing, and that is our value system. In fact, when we sat down in the bedroom of my apartment in 1981, we discussed for four hours what our objective should be. Should it be revenues, profits, market capitalization?

No, we said it should be none of those. We will seek respect from every one of the stakeholders. My view was if we sought respect we'd automatically do the right thing by each of them. We'd satisfy our customers, be fair to our employees, and follow the finest principles with respect to investors, we would not violate laws, and, finally, we'd make a difference to society.

And then, I said, automatically you'll get revenues and profits and all that.

Why have Infosys and the other leaders of the Indian tech industry had such a dramatic and powerful effect on the worldwide tech industry?

It is simply because we are becoming more and more relevant to our customers and we are having greater and greater impact.

Why? For two fundamental reasons. We have helped our customers reduce the cycle time in designing and implementing new systems that reflect the changing marketplace and the new business rules. By reducing cycle time, we have ensured that the people in the corporation that use these IT systems are that much more enthusiastic about the flexibility of the corporation to keep pace with the changes in the marketplace.

Earlier, what was happening was it took three or four years to implement a system and there was a low level of probability of success. Because of the high level of programming talent in India, because of our focus on process excellence, and because of the power of leveraging the 24-hour work day, we have been able to take up large projects and complete them with reduced cycle time with the requisite quality.

People said, 'Now we can go think of new business initiatives to go after.'

The second thing we have done is we're able to give more value for money. Both of these things matter a lot.

Your success is having a dramatic impact on the $600 billion tech services industry-compressing revenues and margins. Will there be a lot more disruption for that industry? Is still just the beginning? Or are things settling out?

The fact that IBM, Accenture, etc have started scaling up their operations in India indicates there's more juice left in this. What we're doing is applying the principle of the global delivery model to activities that people thought were not possible hitherto.

For instance, we believe that 35% of the consulting effort can be done in India, such as proposal preparation, presentation preparation, research, and analytics. Similarly, in the case of our business process outsourcing organization, equity research for a major European bank can be done in Bangalore. The bank is getting better value for money, and they're able to compress the cycle time.

So, I'd say, the best is yet to come in leveraging the power of India -- both by the Indians and the multinationals.

Are the multinationals getting with it now?

They have started focusing in the recent past so they're still a few years behind Infosys. I'm sure they'll accelerate. But the fact that they're accelerating will force us to innovate more.

There are five elements of success. They are:

I tell my colleagues that there is no guarantee we will be in business five or 10 years from now. The only guarantee is the opportunity for us to use these five attributes.

If we embrace them, we'll be in play five and 10 years from now. But the day we forget these, we'll disappear like dew on a sunny morning.

In the United States there's a lot of concern about the effect of what the Indian companies are doing on U.S. industry and U.S. workers. Do you have advice for Americans on how to respond to this?

I define globalization as sourcing material from where it is cheapest, talent from where it best available, producing where it is most cost-effective, and selling where the markets are -- without being constrained by national boundaries.

Anybody can leverage the power of globalization. It's not the monopoly of one geography. As long as corporations recognize this and leverage the power; if they see the entire globe as their arena and leveraging the best talent for each task from the different geographies; and if they operate as a global enterprise rather than a multinational enterprise, then there is a great future for all of us.

What could go wrong for India and the Indian economy?

If we don't improve the infrastructure, we won't be able to create jobs for the less-educated people. And that will create a strong negative current of dissatisfaction in the country. It could have profound effects.

The second area where there could be impact is on globalization. There is so much discussion on the small number of jobs that have been lost in the U.S. because of Indian companies.

But the effect of globalization in India has been much larger. For instance, we had our own auto industry. The cars were not very good. But, still, they were being made in India. Today, we have GM, Toyota, everybody and his brother in India assembling lots of cars. Many of these companies import parts from other countries. As a result, the opportunity for job creation has not been as much as if the parts were made in India.

Similarly, we had our own computer industry. They were not the best. But our people were producing them. When the famous computer companies came to India, we lost a lot of jobs. The same happened with the global soft drink companies.

Probably 2 million or 3 million Indians have lost their jobs. So, do you keep all the multinationals out of India. Or, because 250 million middle-class Indians have benefited, do you embrace it? My view is we should embrace these global corporations, we should accept globalization, because it has benefited the large majority.

Now, maybe I have contrarian views. As globalization becomes more pronounced, if we're not able to create more jobs for the less-educated people, we could then say globalization has not worked.

People are saying that in the U.S. already, even though the data says something else -- that corporations are becoming more efficient and nimble and able to compete in other countries better. The same thing could happen in India.