Lalu to teach management at IIM-A

He may be the quintessentially rustic politician whose 15-year-rule in Bihar as chief minister was dubbed by critics as 'jungle raj,' but India's Railway Minister Lalu Prasad is set for an image makeover when he dons the role of a lecturer at the Indian Institute of Management, Ahmedabad next month.

The turnaround in the financial health of the Indian Railways, with Prasad in charge, has been the subject of major discussion at IIMs and he is already being looked upon as a 'management guru.'

On September 18 this year, Prasad, who is also the Rashtriya Janata Dal president, will deliver a lecture to the management students and the faculty at IIM-A, explaining how he turned around the Indian Railways from a loss-making operation to a public sector unit that stunned everyone by earning a profit of Rs 15,000 crore (Rs 150 billion) in 2005-06. 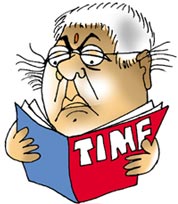 The invitation to deliver a lecture came after IIM-A's Prof G Raghuram conducted a detailed study on the Indian Railways 'turnaround' and decided to introduce the case study as a part of the curriculum.

Ever since Prasad took over as India's Railway Minister, the Railways have become the second-largest PSU profit-earner after the Oil and Natural Gas Corporation. Lalu has surprised many by emerging as one of the top-performing ministers in Prime Minister Manmohan Singh's Cabinet.

So what has Prasad done to the Indian Railways which his predecessors could not? The answer lies in his own down-to-earth attitude and rustic wisdom.

Prasad puts it in his inimitable style: "My mother always told me not to handle a buffalo by its tail, but always catch it by its horns. And I have used that lesson in everything in my life, including the Railways."

When some of the Railway Board members expressed apprehensions in increasing wagon loads, a decision which alone generated Rs 7,200 crore (Rs 72 billion), Prasad said: "Wagon is the bread-earning horse of the Railways. Load it adequately. Make it run and don't stable it."

Prasad's other management mantra for the Railways has been: "If you do not milk the cow fully, it falls sick," which he is practicing while running the Railways.

When Prasad took over, the Indian Railways was a loss-making organisation. The Rakesh Mohan Committee termed it a 'white elephant' and said it was destined to hit Rs 61,000 crore (Rs 610 billion) in bankruptcy by 2015.

But Lalu Prasad had different ideas. His secret lies in the fact that he did not convert the ministry into a Bihar Bhawan but left the crucial decision to his bureaucrats. He is achieving his targets not by increasing fares or downsizing, but by increasing traffic.

He believes traffic volume will rise significantly as the economy booms, yielding room for further reforms, and is also confident that the Railways will be able to generate revenue to help improve safety, open up container train wagons to private players and air-conditioned 'Garib Raths' with low fares retaining his pro-poor image.

Today it is not only IIM Ahmedabad that wants to fete Prasad for posting a fund balance of Rs 15,000 crore in 2005-06. Even premier international business schools like Harvard and HEC Management School, France, have shown interest in turning Prasad's experiment with the Railways into case studies for aspiring business graduates.

For HEC, France, the crux lies in how a railway system, under the jurisdiction of a coalition government, can be put on the road to success. Karine Lejoly of HEC, France, who met Prasad in New Delhi last month, said: "We are looking at making the Indian Railways a part of our course."

It is not just business schools that are awe-struck. Prasad has also attracted the attention of railways in other nations and global engineering houses, like General Electric of the United States.

GE chairman Jeffery Immelt, sensing large business potential with the Indian Railways, met Prasad in Delhi and without mincing words asked him about the focus areas.

The Indian Railways CEO told the GE chief that the turnaround is "real and long-term. The focus is on cutting unit costs, productivity gains and higher volumes. We want to beat the US and China on unit cost. You are number one. We want to be number one."

IIM-A's Raghuraman, who first introduced Prasad in his curriculum, says, "We are not just working on the facelift that he has given to Indian Railways, but also on his personality, the team he works with and the initiatives he has taken."

"It was not as if Prasad applied some new principles. He was just the guy who said 'let us get down to it.'"