Techies, we have a problem 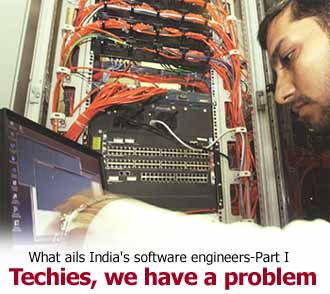 'India does not produce enough good computer engineers and those it does are good at theory but not very well equipped to handle the practical aspects.'
-- Microsoft Chief Technical Officer Craig Mundie

Mundie's bombshell, dropped during a recent India visit, blows our country's pride -- at being an information technology knowledge goldmine -- to smithereens. But just why did Mundie say what he did? What ails our software engineer-developing engines? In a three-part special, we try to find answers. Here is the first instalment:

Not many can deny that Indian students are creative, innovative and scientifically inclined. When it comes to mathematics and the physical and biological sciences, Indian schoolchildren are ahead of their counterparts in developed countries like the United States.

Many bright Indian minds opt for computer science in college to become part of the Great Indian Tech Boom story.

But companies like Microsoft -- which has a full-fledged India Development Centre in Hyderabad -- are not happy with the computer engineers they are recruiting from college campuses.

India's software engineers can work cheaply and quickly, but when it comes to quality, industry experts are unanimous in their opinion: Few Indian software engineers are probing new frontiers, raising the bar or exploring new horizons.

The main concern, Tilak argues, is the "declining share of government expenditure on technical education in the total education expenditure, which presently hovers around 4 per cent, as against over 5 per cent 12 years back."

Retired engineering professor K S Madhavan says research and development in engineering has been in a state of decline in the last few decades because of the poor state of affairs in India's colleges.

Engineering colleges in the country have been growing at 20 per cent a year, while business schools have grown at 60 per cent annually.

But, the quality of Indian engineers is questionable, says Madhavan, who has had a career spanning four decades and is now advisor to several engineering colleges in Karnataka and Kerala.

"That is because of the lack of trained faculty and the dismal State spending on research and development in higher education in the country," he says. Part II: Reboot the System
Part III: Stop the virus
George Iype
Print this article