In 2000, Avnish Bajaj launched Bazee.com, a website that pioneered the concept of online auction in India. In 2004, he sold his online company for a whopping $50 million to the US-based company eBay, the world's biggest online auctioneer. 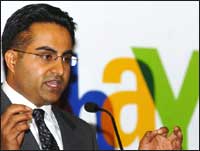 Despite the sell-off, 34-year-old Bajaj continues to look into the interest of the company's Indian arm, eBay India Pvt Ltd.

Bajaj, who is on his way to attend the 10th anniversary celebrations of eBay in San Jose this week, spoke with Tamal Bandyopadhyay and Aparna Krishnakumar on e-commerce and the challenges that lie ahead for eBay India. Excerpts:

How has eBay India been doing?

We started five years ago as Baazee.com at a time when the market was booming. But a lot has changed since then. Over the past few years, we have been seeing more than 100 per cent growth in online users.

Today, there are 20-25 million Internet users in the country and we have nearly one million registered users. While Internet penetration is growing, we still have a long way to go.

Internet usage is supposed to grow between 30 and 35 per cent per annum. The number of people wanting to transact on the Net is also growing.

For every incremental user on the website, we get exponential business. We have a huge business potential but when you benchmark this against eBay US, which posts business worth billions of dollars every quarter, you realise that India is still at a nascent stage of e-commerce market.

Globally, eBay has posted a turnover of $ 40 billion and has 150 million users. What is India's contribution to this?

Since eBay is a listed company in the US, we are bound by disclosure norms, and hence, it would be difficult to share the Indian numbers. At any given time on our website, one would find over one lakh items up for sale.

The prices could vary between Re 1 and Rs 4 lakh, depending on what one buys. We sell a digital camera every 31 minutes, a VCD every 51 minutes and a toy every 15 minutes. Among costlier items, 18 cars and 65 two-wheelers are sold every day.

Who are your competitors?

Our competitors are portals like Indiatimes, Rediff, Tajonline and Fabmall. All these websites follow the B2C (business-to-consumer) model like Amazon. eBay, however, is an e-commerce market place and not just a place for auctions.

Even the websites that I have mentioned are beginning to follow our model.

International Data Corporation has ranked us No 1 with 32 per cent of the market share in 2002, followed by Rediff with 25 per cent and Indiatimes 14 per cent.

Which are the most popular items among consumers?

If you look at eBay US's evolution, the category that grew fastest was collectibles. With large disposable incomes, people in the US were more into collecting hobby items like beanie babies. In India, we sell more retail stuff like electronic goods, computers, mobile phones and jewellery.

The reason for this is that in well developed markets like the US and the UK, the retail distribution is already well established and there are specialised stores for electronics and mobile phones, something which is absent in India. So 80 per cent of our stock on eBay are retail goods.

Besides, there is a lot of trading between small towns and large towns. Hosiery makers in Tirupur and diamond jewellery craftsmen of Surat prefer eBay as the place to interact directly with buyers to eliminate middlemen.

On eBay, a diamond jewellery is sold every 5 minutes and a laptop every 150 minutes.

At eBay, we believe in providing a global platform to local sellers. At least 30 per cent of our business comes from exports to countries like the US, the UK, Canada and Germany.

Do you foresee a scenario where e-commerce would replace shopping malls in India?

E-commerce complements conventional shops and doesn't replace them. Even in the US, despite the presence of Net biggies such as eBay and Amazon, Wal-Mart continues to have a strong presence.

Wal-Mart is primarily into consumable goods, something you would not buy online. However, retail chains like Circuit City often use eBay to sell its goods.

Even in India, eBay is a platform for the small and medium entrepreneur. In the past, we have had companies like Daewoo, Samsung, LG using eBay to clear inventory.

Even banks sell cars through eBay. Normally, these cars are claimed from clients who have defaulted on payment of instalments.

eBay entered India by buying out Baazee.com. Will it go for more buyouts?

eBay's growth strategy in any country is rarely though buyouts even though it sometimes happen at the entry level. Our growth strategy hinges on three As -- acquisition, activation and activity.

Acquisition here does not mean buyout of companies but acquisition of Internet users. eBay first explores the stage of e-commerce in a country and then decides where it fits in.

China seems to be the focus market for eBay globally. Where does India stand?

It's a question of priorities. For eBay, there are currently five critical areas, including the three As, classifieds, paypal, motors and China. India is a big strategic market for eBay.

In general, China has always been considered five to 10 years ahead of India, but when it comes to Internet, India is far better in terms of payments and banking systems. We are looking forward to grow the company's business in India.

Considering that the entry barriers are minimal, it becomes easier to duplicate the eBay model. How do you insure yourself against such risks?

Yes, it's easy to duplicate the auction site. But one of the big entry barriers on eBay is the community involvement. eBay has a concept of feedback mechanism by which we ensure that both the buyer and seller are aware of each other's reputation.

Imagine a new website similar to eBay offering users similar kind of service. Why would someone go to a new website that has no means to authenticate what one sells?

Yes, competition does worry us, but eBay today has the early mover advantage and despite competition from Amazon.com and Yahoo.com, it has managed to stay ahead.

Are you still haunted by the ghost of the MMS scandal?

What happened was extremely disappointing. We had secured our website in every possible way using encryption, firewalls and the necessary security protocols.

But when someone has a malicious intent, one can bypass technology. The amusing part is that the clip was not even being sold on our website. There was just an ad that was posted on our website escaping our filters.

We managed to get the ad off the site within a few hours and the whole furore began 10 days later. As of now, the matter is sub judice and I cannot talk about it.