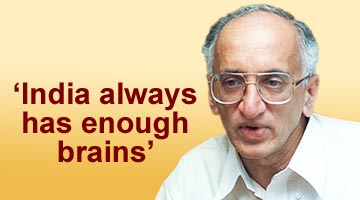 Dr M S Ananth, Director, IIT-Madras, was one of the invitees to the recently concluded Global IIT alumni conference in Washington, DC.

In an exclusive interview to Contributing Special Correspondent Shobha Warrier, he talks about how effective the conference was and what he expects from IIT alumni for their institutions and the country.

Part I: 'It's nice to have unlike minds'

Did you make this point (about alumni giving back to their alma mater) to the IIT-Madras alumni when you met them at the IIT conference?

Yes, I spoke to them. I have started an IIT-Madras group fund and I have got many projects, and they can get involved in them. For example, the girls' hostel is being built by Jayashree Deshpande (whose husband Gururaj 'Desh' Deshpande is one of the richest Indians in the world. Desh is also an IIT-Madras alumnus). (Infosys co-founder, Deputy Managing Director and Chief Operating Officer S) Gopalkrishna has given several things like electronic classrooms, studios.

Wherever the contribution comes from the alumni, we put the donor's name on it. MHRD (India's ministry of human resources development) permits that. Before the nineties, it was not permitted.

How receptive was the alumni to your suggestions?

I think they are quite receptive. About 10 per cent of the alumni are my own students, and I have a very warm relationship with them. Not everybody has so much money that they can give you.

It is a matter of many people making small contributions, and a few making large contributions. They have to be convinced that these projects are interesting.

Are you happy with the outcome of the Washington, DC conference?

There are two objectives.

From the alumni point of view, they have to build a social identity. I think they have achieved that.

From our point of view, they were connecting with the alma mater which they did very successfully. They gave us an opportunity to talk to the alumni of every IIT. That was also satisfactory.

One of the things that didn't happen was there was no participation of our old students who are faculty in various institutions. Their presence was very, very low. Faculty typically will not come unless there is a very specific session and a well defined role for them.

Do you believe in the word brain-drain?

The whole concept has changed now. There is no drain nowadays. The brain-drain problem is actually brain circulation. There was a vacuum and it was being filled.

Higher education did not receive sufficient research support in this country. We should not blame the country too because the country had its priorities. At that time, research support was plentiful in the US, and people went there. Even from Europe, people were going to the US for research. Even if they go there, they are emotionally attached to India, so they come back. When they come back, they give you contributions in various forms.

It is possible for us to work jointly with the alumni to tap research funds abroad. So, we can write for Euro project funds and American project funds. That also brings in money for research and the overheads will go to the corpus. There are many benefits. I don't think you can calculate benefits and put them on either side and balance them.

When I was there in the US for the conference, I was also interested in recruiting faculty. People had applied from there. I stayed back one more day and interviewed faculty right there with the interview committee approved by the board, and I selected 9 faculty members. The major shortage in India now is faculty.

From your experience as an academician, have you felt any difference in the attitude of the various generations to India?

Is there any truth in the general perception that the new generation is much more attached to India than the older generation?

Even the older ones were attached to the country. I would say brains, like hearts, go where they are valued.

The question is like, my heart is valued here but my brain is valued in the US, and where do I go? This has been the dilemma all of us have faced. Things are changing slightly in this country so, your brains are also beginning to get valued here.

By valued, I don't mean the country is paying a lot. It is having a peer group which can appreciate the details and subtleties of what you are doing. We didn't have those critical groups; we had only one or two in every area. The bulk of the people were in the US, and it is still true. But we are getting it in this country increasingly now.

It was reported that a majority of the students who are passing out this year from the IITs, especially IIT-M, preferred to work in India rather than go to the US for higher studies as they were offered very good pay packets. What is your reaction to this?

That is because the economic situation has changed. It always happens. When the economy is doing well, students will get good job offers, and they will stay. More students are taking up assignments but the question is, where are they going?

It is narrow minded of a university to think that if I train 30 chemical engineers, they will all go into chemical engineering. They will go to different fields but they will bring the flavour of what they studied to various things.

In fact, creativity comes when people change their fields.

I am not really worried about brain-drain. India always has enough brains left.

It is also said when the economy does well, research takes a back seat

Not directly a back seat. There is a direct co-relation in one sense. When the economy is good, students get good jobs, and they don't come for research. This is true in the US also. There is always a slight imbalance. Ultimately the best development ideas come from universities. So, you can't ignore research for a long time. At the same time, the economy is important. These kinds of ups and downs will always happen.

Most Indian students say as far as postgraduate higher education and research are concerned, India can be compared only to the 60th or the 70th ranked university in the US.

I don't agree with the observation. Students are very mistaken, I would say.

It is true that US universities or Zurich University have a very large number of Nobel Laureates. To win a Nobel Prize takes a special attribute plus special circumstances. I think there, we are at a disadvantage.

First, we don't have large research groups, and we are not working on very large research problems because of monetary considerations. The only large investments in this country are mostly in developmental work which is good for the country but not for fundamental research. So, in this sense, we have a handicap.

I tell my students, if you have Nobel quality, don't worry about where you are, go to the best place in the world. You don't have to come back to India because the research funding is so high in the US. But it is not worth putting so much money in research here for one brilliant person.

Many of the B Tech students do not have any idea about the kind of research we are doing here. I have been to Princeton, I have been to Boulder and I feel the thesis of my PhD students are as good as anything that was submitted at Princeton or Boulder.

Yes, it is true that because the US universities have intelligent brains from different places, you get different points of view and wider perspective of education than a student gets here. Secondly, they are better at communication. Their society places a tremendous emphasis on communication whereas in Indian culture, when I explain something to you, I am afraid of insulting your intelligence. I think it is a cultural problem.

Second, they have large problems on which people work, each of them contributing a bit to the project. Here, we do not work on such large problems. I think we have to start looking at that. One of the groups here that has done well is Ashok Jhunjhunwala's. He has been able to address a large problem that serves a large rural community.

You need more such groups, and we need groups in fundamental areas also. I think it is only a matter of time but we get impatient.

I also would like to say that unlike in the past, we are very self confident now.

I think India is looking up as the future of the world in many ways.