'It is always nice to have unlike minds' 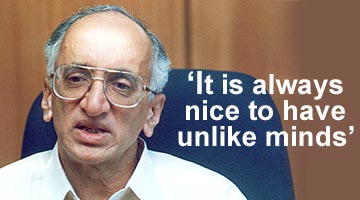 r M S Ananth, Director, IIT-Madras, was one of the invitees to the recently concluded Global IIT alumni conference held at Washington, DC.

In an exclusive interview to Contributing Special Correspondent Shobha Warrier, he talks about how effective the conference was and what he expects from IIT alumni for their institutions and the country.

Before the IIT alumni global conference began you remarked in an interview that you didn't expect any direct take offs from such conferences. What is your response after the conference?

The conference itself was very well organised, and had a good list of speakers. The sessions also were good. There was a general good feeling.

What were your expectations when you went there? Anything concrete for the country and the institution?

It doesn't work that way at all. These things don't happen in a conference. Basically, we always underestimate the communication required for such things to happen. The other person also must be in a receptive mood to your ideas. Such conferences are very useful in that respect.

One of the major things in which alumni can help is in the Intellectual Property Rights. Patenting in the US is quite expensive, and individual IITs don't have enough IP for them to warrant having an office or a lawyer there. We have a pan IIT movement and all the IITs put together have enough IPs that can be defended in the US. So, one of the ideas is, can we talk about this.

They can also help advertising the IITs in the US so that more and more our own people are attracted to come back.

The third thing is my own opinion. I have been telling the ministry of human resources development that we should have at least 10 per cent faculty from all over the world. For example, MIT doesn't ask you, are you from India or elsewhere? If you are good, they take you. So, we also should have that freedom. I believe a mix of that kind will help a lot to improve the situation in the IITs.

Do you mean quality?

It's not quality alone. We have good quality people working here but it is always nice to have unlike minds in the university. Unlike minds come from different cultures, and unlike minds look at problems from different angles and throw up new ideas. Therefore, I am suggesting that our post graduate strength should also consist of 25 per cent foreign students, and the foreign faculty should be 10 per cent to begin with. This way, you can create an atmosphere similar to the good institutions in the US.

But this will happen only through advertisement which will build some brand value for IITs here also.

If you advertise IITs well enough, there may be people from other countries who would be interested to teach here.

What new ideas were discussed at the conference?

There were several ideas. There were several panels and sub sessions. That is how you get ideas. You get the US perspective on the problems at such sessions. I was on a panel on manufacturing. There was another one on manpower requirements in the US. So, you do get an idea why they are desperate for people, how desperate they are, and what our bargaining points are.

There was also another discussion on Georgia Tech starting a graduate programme in Hyderabad. The question is, is that a threat? Should we do something about it? Personally, I feel we are sufficiently large not to look at everything as a threat. In fact, everything is an opportunity. If they come, I will lose some faculty because there is an advantage of dollar payment here in India itself. These are not threats at all.

Many of our alumni left the campus 20 years ago, and they don't know so much progress has occurred. They have a frozen notion about the IITs. Then, they discovered that we have done so much that they didn't know. We said it is your business to find out.

Then, we had separate break out sessions with IIT-Madras alumini alone.

What was your message to the IIT-M alumni at the sessions? Did you ask them to give something back to the institution they have left behind?

The concept of alumni giving back to their alma mater is new in India. In fact, it is new all over the world except the US. Only the US has this tradition. There could be several reasons for this. They don't have a traditional society. They have this culture of separating their wealth from what goes to the children.

By around 45, they give their children their share and when they die, they give this money to charity unlike in India or Europe. Philanthropy generally comes when you don't have heirs to give your money too but in the US, it's not so.

In that sense, philanthropies of alumni has been a characteristic of the US. Now, England is beginning to learn this. Germany hasn't done it yet but they are asking, how do you do it.

Now, we have started doing it. We have alumni who have benefited from the extraordinary education at very low prices, and they are conscious of it. They are willing to give back now. We were looking at alumni contributions for many things.

US schools have a systematic way of approaching their alumni. So, when they are asked by a US school, they think I should also give back to my parent school, the IITs. That is how I think IIT Kharagpur got the Vinod Gupta School of Management. I think we can also start asking. As long as it is for a good cause, it is good.

Tomorrow: What the IITs can do. Don't miss the second part of the IIT-M director's interview.