If you were to scan the pharma landscape of the country, you would find that most successful companies have been founded by men of science: Parvinder Singh of Ranbaxy, Anji Reddy of Dr Reddy's Labs, Khwaja Abdul Hamied of Cipla. 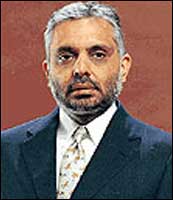 Except for Ajay Piramal, who made the switch from textiles, and the Bhartia brothers, Shyam and Hari, who started out with chemicals -- they set up Vam Organics in 1978. Piramal has already made it big (his Nicholas Piramal is amongst the top players in the Indian market) and the Bhartias have big pharma ambitions, writes Business Standard.

The Bhartias began by acquiring Max India's bulk drugs unit and followed it up with one acquisition in Europe and two in the United States. Bulk drugs, generics, formulations, contract manufacturing, contract research, clinical trials, drug discovery and biotechnology -- Jubilant Organosys has a wide spectrum of life sciences activities in its portfolio. All built within the last couple of years.

Hari Bhartia, co-chairman and managing director of Jubilant Organosys, is the public face of the company. His brooding eyes and salt-and-pepper beard often peep out of Page 3 columns. Bhartia's wife, Kavita, is a designer and owns an upmarket designer store called Ogaan. So he can't always avoid being seen with the capital's fashion fraternity.

Shyam, the older of the two, is more behind the scenes, looking after finance and marketing. While Hari married outside the Marwari community, Shyam is married to Shobhana, KK Birla's daughter and the vice-chairman of The Hindustan Times. And while Shyam is an accountant by training, Hari is a chemical engineer from Indian Institute of Technology, Delhi. "Shyam provides the Bania buddhi [the trader's cunning] to the business," an investment banker who has dealt with the family had once told me.

After being saluted by a burly Sikh guard and ushered in by women in spotless whites, I was seated at San Gimignano, the Italian restaurant at The Imperial. The restaurant takes inspiration from the medieval town of beautiful towers called San Gimignano in Tuscany.

Even as I was admiring the pictures of the town hanging in the restaurant, Hari Bhartia walked in, dressed in a blue jacket. It was mid-December and the sun was out. In a matter of days, it would begin its long hide behind the thick fog that wraps itself round Delhi every winter. We decided to move to the terrace courtyard, Paradiso DiVino.

It was close to two and lunch could not be delayed any further: salad for starters, fish (sole) for me and pasta for Bhartia. And some nice red wine to wash it all down.

At a time when most business families are falling apart, how have the Bhartias managed to stick together. "We work as one," Bhartia said. "Anyway, our involvement is more at the level of the board of directors."

To be sure, the Bhartia family has already seen a split. Some seven years ago, Shyam and Hari's father, ML Bhartia, and their other brother, US Bhartia, set out on their own with India Glycol.

"You were doing a fine job making organic chemicals and adhesives. Why this switch to the extremely competitive world of pharma?" I wanted to know. Last heard, there were over 20,000 pharma companies in the country.

"Some years back, we realised that we should be in a sector where there are strong entry barriers. And we thought that knowledge of science could be the strongest barrier," Bhartia said. The Bhartias were anyway making chemicals for use in the pharma industry. So pharma products were the next logical extension.

Around the same time, the Bhartias decided to give their business an image makeover. So out went the old name, Vam Organics, and in came Jubilant Organosys with a new logo designed by post-modern graphic designer Shombit Sengupta, then based in Paris.

"What is the future for adhesive brands Vamicol and Jeevanjor that you had built at considerable expenses," I asked. Bhartia said there were no plans to get out of the adhesives business.

Still, the Bhartias are banking on their strong manufacturing base to make a mark in the world of medicine. "Whatever drug we make, we ensure that we are the lowest-cost producer in the world," Bhartia said nibbling at slices of cottage cheese and lettuce. This is the USP of the Jubilant business model.

But like any shrewd Marwari, the Bhartias do not want to take on Big Pharma in the West by challenging their patents. "We want to partner them," Bhartia said. A very safe business model, though returns might be lower.

Besides pharmaceuticals, little is known of the other businesses of the Bhartias. For the record, they are the franchisee for Domino's in south Asia, have bagged Audi's dealership for south India, are the sole representatives for Bell helicopters and Honeywell for commercial avionics and aircraft landing systems in India, and have interests in oil and gas exploration and production.

"How did Domino's happen?" I asked. "A friend of mine was the franchisee for Japan. It was through him that we got the franchise for south Asia, except Pakistan," he said.

After the initial hiccups (too much expansion, too fast), the business is on its feet. "We have learnt a lot about dealing directly with consumers and supply chain management," Bhartia said. The knowledge gave them the confidence to diversify into retail: the group has set up a chain of superstores called Monday to Sunday in the South and are going to launch a hypermart, Jumbo Saver. (The retail ventures are being looked after by Shyam's younger son, Shamit Bhartia.)

I reminded Bhartia of his other food venture, Hot Breads, which never really took off. "We have more or less got out of that," Bhartia added.

The lunch was over and we were on coffee. The conversation had now moved on to oil and gas. The Bhartias have a stake in the gas find reported by the Gujarat State Petroleum Corporation in Cambay Basin. As there has been much controversy about the size of the finds, I asked him whether the claims made by Gujarat Chief Minister Narendra Modi were real. "The finds are pretty substantial," is all he would say.

Bhartia started unveiling his business plans. The brothers are looking for mid-sized assets in India and abroad for exploration and production, in partnership with others. "We will invest about Rs 100 crore (Rs 1 billion) in each of these," Bhartia said.

To fund these plans, the Bhartias have drawn up plans to list group firm Jubilant Energy on the Toronto Stock Exchange. Toronto, because it is fashionable amongst oil and gas firms to be listed there.