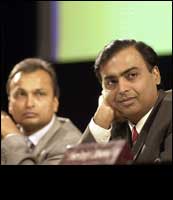 The rumours about the Ambani brothers splitting up got a new lease of life when Reliance Group Chairman Mukesh Ambani admitted to having differences with his brother Anil over 'ownership issues.'

He, however, said that the differences "are in the private domain." He discounted fears that these would have any bearing on the functioning of the company saying Reliance is one of the strongest professionally-managed companies.

Mukesh Ambani said investors in his company had no cause to worry, as the issues will have no bearing on the functioning of the Reliance Group.

"Well, there are issues which are ownership issues. These are in the private domain, but as far as Reliance is concerned it is a very-very strong professional company," Ambani told CNBC TV 18 when asked about differences between the brothers.

There have been reports of problems between the two brothers on the issue of ownership of Reliance Industries Ltd after the demise of their father Dhirubhai Ambani.

Citing an example of General Electric Company, Ambani said like GE has moved beyond Jack Welch, the legedary former CEO of the company, Reliance has also moved beyond one, two or three individuals.

"In our country we are not recognising that Reliance is one of the strongest professionally managed company that attracts huge talent and has moved beyond any one, two or three individuals including myself," he said.

Anil Ambani could not be contacted for comments on the issue, despite attempts.

As per the information of Centre for Monitoring Indian Economy, the promoters (Ambanis) hold 46.67 per cent of the stake in Reliance Industries Ltd, 13.48 per cent is held by the public and foreign institutional investors own 22.85 per cent equity.

Reliance is India's largest private company with an annual turnover of about Rs 80,000 crore (Rs 800 billion) and has presence in various sectors including oil refinery, petrochemicals, power and telecommunication.