What the Left wants 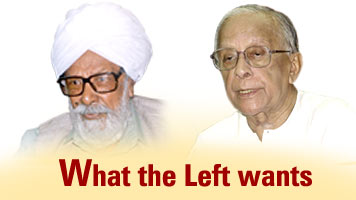 A Congress-led coalition will replace the Atal Bihari Vajpayee government this week.

But the indispensability of the Left parties' support to the new government, and their frequent utterances over the direction the Indian economy will now take, have sent the stockmarkets into a tailspin.

Why is there a sense of disquiet over the Left parties' involvement with the government? What exactly do they seek as their pound of flesh?

A ready reckoner to the Left Front's demands:

This is their most vociferous demand, and the rationale is simple.

"When the Congress has more or less made clear its opposition to privatisation of profit-making PSUs, why have a separate divestment ministry in the first place? If there is any need to privatise at all, the job can be handled by the finance ministry," argues senior Communist Party of India-Marxist leader Prakash Karat.

The Left Front says outright privatisation and divestment, a key policy of the Atal Bihari Vajpayee government, are destroying public sector units and rendering hundreds of thousands of people jobless.

Another argument extended by the Left parties is that since a law limits the size of the council of ministers to 10 percent of the total strength of both Houses, 'superfluous' ministries like divestment should be abolished.

The Left parties want the new government to review all divestment decisions taken by the outgoing government.

The Marxists want the new government to probe the 'bear cartel' that was active when public sector shares like those of GAIL and ONGC were put on the block.

The Left says the Vajpayee government has been lax on many Indian industrial houses that have been evading tax for years, and that the government can easily mop up Rs 80,000 crore in arrears from tax-evading corporates.

The Left alleges that the top 100 business houses in India saved tax to the extent of Rs 6,853 crores in 2000-01 because of what it calls the Vajpayee government's pro-rich tax policies.

The Left parties have been the most virulent critics of the power and telecom policies pursued by the Vajpayee government, and want the new government to review all the telecom and power privitisation policies.

The Left says privatisation of the banking sector should also be halted. Instead, reforms should be introduced to make banks accountable and restore social priorities; there should be proper regulation of non-banking finance companies to safeguard the interests of depositors; capital flows should be regulated; and no convertibility should be allowed on the capital account.

The Left says the abolition of QRs on imports and steep cuts in customs and import duties have badly affected agriculture and made small and medium industries vulnerable to the global market and spelt ruin for these sectors. [Quantitative Restrictions are quotas on the amount of certain commodities that can be imported or exported. The quotas are administered through a system of licensing. In line with the General Agreement on Trade and Tariffs India has already taken off close to 700 items from the QR list.]

The Left says the Prevention of Terrorism Act is a draconian piece of legislation to fight terrorism and that like its precursor the Terrorist and Disruptives Activities (Prevention) Act, is being misused against political opponents. To buttress its point of view, it points out that POTA has not prevented terrorist attacks in Jammu and Kashmir and elsewhere.

The Left wants the new government to come out with a new, independent and non-aligned foreign policy which defends India from imperialist pressures.

The Left opposes America's superpower unilateralism and NATO's globally expanding role. It wants the government to take steps for South-South cooperation and to revive the Non-Aligned Movement.

This is one of the most crucial demands from the Left. It says India should cancel Indo-US military cooperation, which links up India with America's global strategy, and should instead promote the policy of having no foreign military bases in South Asia.

The Left says the Vajpayee government's record in fulfilling its social responsibilities has been dismal. The central budget allocation for health, for instance, is around 1.3 percent of the total budget. So the Left wants a new ministry for creating social infrastructure.