Of biryani, history and entrepreneurship 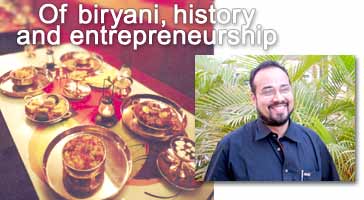 Did you know that there are over 26 varieties of biryani made in India?

Or that biryani comes from the Persian word 'birian' which means 'fried before cooking'?

Or that, though it is considered a royal dish of the Nizams and the Nawabs it was never ever served to the royal guests?

Thirty-six-year-old Vishwanath 'Vishy' Shenoy has trivia like this and the history of the biryani on his lips. He also has a restaurant dedicated to his passion: The Biryani Merchant, which he hopes to develop into a national chain.

About a month ago, the first restaurant was launched at Castle Street in Bangalore.

"Chennai is too conservative while Hyderabad places too much of premium on its knowing all about biryanis. Delhi isn't too hot on rice, while in Mumbai real estate is very expensive. Bangalore, with its cosmopolitan outlook, seemed the best place to do a proof of concept," says Vishy Shenoy, CEO, Epicurean Entrepreneurs Private Limited, the company that runs the restaurant.

Biryani Merchant is jointly owned by Vishy Shenoy, who gave up an career as head of sales and marketing in one of Sri Lanka's biggest industrial groups; Abhik Biswas, a technology professional with Cisco; and Ramesh Sivaram, a professional with specialisation in processed foods.

Claiming to offer the 'Quintessential Biryani Experience', Biryani Merchant has a range of biryanis that come complete with appetizers, accompaniments, desserts and a special Sulaimani Chai.

"Biryani Merchant is a showcase for biryani, a dish that has been abused like no other. The effort here is to apprise the guest of the origin, evolution and the history of the different varieties of biryani. Hygienically prepared and served with traditional accompaniments and desserts is what Biryani Merchant is all about," says Shenoy.

For the uninitiated, Shenoy offers a peek into the history of the biryani.

Biryani is believed to have been brought to India by Taimur Lang, or Taimur, the lame.

One branch of the biryani comes from the Mughals, who got the dish from Persia and subsequently during their reign in India, the biryani entrenched itself in places like Lucknow, Hyderabad, et cetera.

The other branch of biryani is supposed to have crossed the Arabian Sea and come to Calicut, brought in by the Arab traders. The Calicut Biryani is served with vinegar pickles and papads fried in coconut oil, is a softer variety and light on the stomach has no relation in terms of taste to the other biryanis in the country.

Almost every community today has its own version of the biryani. In the northwest is the Memoni Biryani (people who inhabited the area between Sindh Gujarat and Pakistan) is an extremely spicy biryani, while the Sindhi Mutton Biryani is distinctly different.

There is also the Turkish Pilaf and the Iranian Biryani. The Bohris have their version of biryani that is normally cooked for their weddings and is flavoured with a lot of tomatoes. The Kashmiri Bhuna Ghost Biryani and the Kashmiri Katche Ghost ki Biryani is the benevolence of the Mughal rulers to the northern-most state of India.

The Lucknow (Awadhi) Biryani is the footprint the Moghuls left on the eastern part of India. From Lucknow the biryani moved to Calcutta when, in 1856, Nawab Wajid Ali Shah was deposed by the British.

His team of cooks moved with him and so did the biryani. In Kolkata the biryani entered poorer homes, which could not afford meat everyday, so the meat was replaced by potatoes.

Aurangzeb is believed to have invaded the South and installed the Nizam-ul-mulk who later as the Asfa Jahi ruler became the Nizam of Hyderabad.

That explains the movement of the Biryani down south, says Shenoy. From the Nizam's kitchen originated the Hyderabadi Biryani and the delicacies that go with it like the Mirchi ka Salan, Dhanshak and Baghare Baingan.

It is not difficult to imagine that the repertoire included 26 types because the Hyderabadi Biryani itself is made in different styles -- Katchi Biryani, where the meat is marinated in curd and then steamed with rice, and the Pakki Biryani, where the meat is cooked with all the accompanying spices and then the rice is simmered with the resultant gravy redolent of mace, ittar and kewra in a sealed handi with saffron and cardamom.

Marriages between the families of the Nizams of Hyderabad and the Nawab of Arcot explains the journey of the biryani into what is called Arcot Biryani, another distinct type of biryani, which is made with smaller grains of rice.

Instead, customers are asked if they are vegetarian or non-vegetarian.

For Rs 300, a full meal is then presented to the customer. The fare starts with Gazak (Kebabs) followed by three special biryanis each for vegetarians and non-vegetarians . That acts as a sample menu.

Once past it, the eaters can have as much as they want of a particular biryani or if they can stomach it, all the three. All the biryanis come with accompaniments.

There is also a desert and Sulaimani Chai, a fragrant black spiced tea to round off the meal with.

Biryani Merchant plans to open around 12 outlets over the next three years. Each outlet requires an investment of Rs 30 lakh (Rs 3 million) and Shenoy says they are looking at franchisee possibilities to expand.

After Bangalore, Pune would be the next stop for the Biryani Merchant in around September. By April 2005, Shenoy and his team hope to have three more restaurants in Mumbai, Delhi and in the United States.

"We have shortlisted the Gulf and European countries, considering the Indian populace and the travelling Indian population there and their craving for authentic Indian food. We already have enquiries and have initiated discussions with business associates in a couple of these cities," says Shenoy.

Along the way, Shenoy also hopes to clear some popular misconceptions about biryani.

"Biryani is always dum cooked. The rice is fried separately and parboiled while the meat or the vegetables are marinated separately. They two are then layered and cooked under a dum (an earthen cooking pot)," he says.

Being in Bangalore, it is inevitable, that information technology should play some role in the enterprise.

In this case, Biryani Merchant offers 'wireless Internet connectivity' -- or Wi-Fi -- for customers who want to stay connected or do a spot of surfing even as they eat.

And what's the test of a good biryani?

"Take a palm-full of the biryani and sprinkle it on the floor. If all the grains remain separate, then you have a good biryani. It means that the rice has been fried just right to ensure it doesn't stick. And, the biryani should not be too spicy. It should be fragrant," says Shenoy.

However, sprinkling it on the floor is certainly not a test that Shenoy is recommending to his customers.