'Asian is the culture of the future' 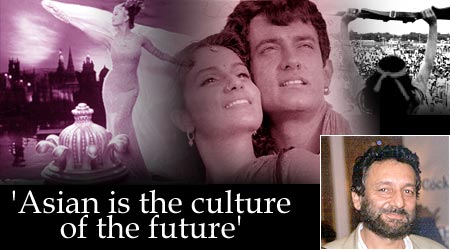 Filmmaker Shekhar Kapur says the expanding infotainment market, estimated to grow to more than a trillion dollars in 10 years, has profound implications for India and Asia.

An accountant by training before he turned to films, Kapur says the sheer size of this market will give India a global role in defining lifestyles and driving what he describes as a process of 'reverse colonisation'.

In the first part of an exclusive interview with Senior Editor Shyam Bhatia in London, Kapur says the Asian century has already arrived, but needs nurturing, guidance, and structure. Excerpts:

What do you base your projections on?

Business projections are not difficult, but, unfortunately, all business projections are done on an historical model. Let's look at the trends. The world is changing so drastically every day that it is not possible to draw conclusions 10 years from now unless you have looked carefully and wondered what new things are likely to happen.

People are predicting that the global media business will be worth a trillion dollars in 10 years. If this growth is coming, my question is, where is this growth coming from? Where are the markets for this growth?

Yes, media includes entertainment, films, television, games, DVD and video. Newspapers are not that large a proportion. It is infotainment, yes.

Every way we look at it, my guess is that 10 years down the line the absolute revenue in the entertainment business will be more out of Asia than from the West. Let's take a look at the demographics. Entertainment demographics run from 14-15 to just under 30. The stunning population statistics are huge in the particular demographics I'm talking about.

If you talk about the business of health care, I would say yes, given that people are living longer, the amount of people that are going to get into that demographic will be huge as a percentage of the total.

So healthcare business, yes. Even that part of the healthcare business they keep talking about, a large part of the servicing is shifting to India. I guess the big service that will shift to India specially is health care. You'll probably find that old people's homes exist now in India. They [the West] will be offloading their people at a huge cost to themselves, but at half the cost of what they have to do to keep them well here.

Are you saying that it's the 15-35 age range that will be consuming infotainment and that huge potential market is in India?

Basically, what we are doing is just touching the tip of the iceberg, whether it's India or China. Anyway, when you take Asia, whether it's India or Japan, China, Indonesia, Bangladesh, Pakistan, Malaysia, Singapore, they are all about 75 per cent of the world's population already. Right? So when that happens, one thing people don't understand and what I'm banking all my predictions on is a philosophical thing. What happens is that when the financial strength of a particular consumer group becomes stronger, that particular consumer group starts to extend its own cultural muscle.

When American culture and therefore entertainment started dominating the world after the Second World War (they did it in many ways by giving free entertainment also), essentially they could do what they did because at home they were financially strongest anywhere in the world. So they called the shots and they had the financial muscle to go out and conquer the rest of the world, which was coming out of the wars and was underdeveloped. That's what McDonald's did. Before McDonald's went out and conquered the world in a full franchise system, they were hugely strong in their own home market.

Are you saying that the billion-strong Indians in 10 years time will be calling the shots as far as the entertainment industry worldwide is concerned?

Yes, they will ask for their own culture. And the shape it will take is that it will go mythic. In Asia we like more mythic stories. That's the kind of change we'll have. Over the years the 70 per cent majority will gradually marginalise the Western market. So what happens is that just as we now love Tom Cruise, the West will learn to love our actors and they will get used to those faces.

So in 20 years time you could have a Shah Rukh Khan who would earn US $40 million because by that time his market has extended.

These are tastes. Language is important. In 20 years time I believe the Chinese will start making English-language films. Just remember all entertainment, 80 per cent of the viewership of all entertainment, is dubbed into the local language. So that's never a problem, and it's very sophisticated. Even today a Hollywood film you see in Italy is dubbed into Italian. In Germany it's dubbed into German, in France into French. It's not just Arabic and Hindi that they do, in all of Europe it's dubbed.

This shift in culture and the aggressiveness of the Asian consumer is going to be supported by a large number of that culture who actually live in that lifestyle. Currently there are 27 million Indians approximately who live outside India and their combined GDP is 75 per cent of the total Indian GDP. Add to that Bangladeshis, Pakistanis and Chinese. So there's probably a hundred million Asian diaspora dotted around that will support any such reverse cultural colonisation. They will also have the purchasing power. And the purchasing power at home is growing.

Shall I give you an example of this? Everybody told me Bombay Dreams won't work, including Andrew Lloyd Webber. It became the most successful show in town. Who supported it in the first month? The diaspora. Apollo is the largest theatre in town [London]. It's now going up 80 per cent and 90 per cent every day and 100 per cent at the weekends. Still, it's one year down the line.

It was for the Really Useful Group -- Andrew Lloyd Webber's company -- the fastest payback for investors ever. Not even Phantom of the Opera returned it that fast. All investments were recovered within a year, in fact within eight or nine months it went into profit.

So I have tested my theory here. The idea came to me here in London, but I have been in that mode if you like, that Asian culture is going to be the culture of the future. That's why I go to the World Economic Forum every year, I talk about it. People understand it, but they don't know what to do about it. We'll come to that later.

Let's talk more about Bombay Dreams and about growth. If you talk about ticket price growth, in the US it has gone up from about US $5 to $7. In the UK or Europe it has gone from $6 to $7. It has not been that amount of growth. But take India. It has gone up from Rs 40 in the balconies to Rs 250 in the inner cities. We have more multiplexes being built in India and China than anywhere else in the world.

Is cinema the only avenue you are looking at?

No, let's take television. Twelve years ago India had two state channels and now we have 24 channels. The number of consumers is there. Let's go further. The figure of US $1.3 trillion is never going to be achieved unless there is some kind of merger between various industries, what they call convergence. A convergence between digital and entertainment.

Ultimately, what is convergence? People keep talking about it. The end use is always towards the consumer. That's what you are aiming at. The biggest thing convergence will do is change delivery systems. This morning I just set up my broadband and I found a thousand radio stations to choose from. So I'm picking up radio stations from all over the world and it's incredible. Broadband video screening is giving me convergence, so I don't even need to switch on the radio anymore. I have 1,000 radio stations and I can just turn them on.

I'll give you an example. Steven Spielberg today decides to release Jurassic Park, let's say. Because it is an event -- like the Harry Potter book or the new Microsoft operating system -- there are queues of people waiting to see it. Why? They could wait for a few days or a week. But human beings in this attention-grabbing world can be provoked into doing this kind of thing. I've seen it in India: first day, first show, everybody wanted to see the show in the first week, on the first day, just to be able to say they had seen it. And they were willing to pay. At a time when the price was Rs 10, they would pay Rs 300 to get into the first week, first day show.

This was true of any popular film at that time. People would be happy to pay that sort of money, people who could hardly afford that Rs 300.

Given the event economy, if Steven Spielberg were to release Jurassic Park 6 and he said it to everybody, I'm not going to release it in theatres, but now in two, three years we'll have, for example, a technology that can download a two-hour video in 30 seconds on to my Internet. So what Spielberg could say is that on Christmas Eve, between 11.45 and midnight, he will release it for US $10 apiece and you can download it. My guess is 300 to 400 million people worldwide will download it and you are talking about $3-4 billion cash coming in within 15 minutes.

This is not very far away. Imagine 10 years down the line it came out of the Chinese on the broadband, out of India on the broadband. We have an affinity. The Eastern mind has a much greater affinity with the Internet because it accepts a sense of chaos much easier.

Do you have examples of that?

When the BBC ran a competition to discover the entertainer of the millennium, do you know who it was? Amitabh Bachchan. What does that prove? It proves the Indians are addicted to entertainment, but it also proves the amount of Indians that must be on the Net all the time. So what I'm saying is that once you are on to broadband the delivery system and the convergence will change the nature of the game.

By that time imagine the number of people hooked on. Three hundred million in India who want to see? That's nothing in India. I would say that when you release a very big film in India, the awareness factor of that film is probably 500 million. Out of that, 250 million have broadband and if you release that on broadband, 250 million at Rs 200 each, just look at the calculations.

Now you add China to it and the revenue is staggering.

How does this specifically affect India?

Because the future is convergence, because the future is a tie-up between digital industries, computers and entertainment, which is the creation of stories and the creation of ideas, and the disciplining of those ideas into an audience-friendly form, India today has the largest number of qualified people in the digital world. IT as we call it -- we call it information technology, but it's a lot more than that -- and the largest number of people in the entertainment world.

So India stands at the point where it can become the most impressive nation in entertainment or infotainment.