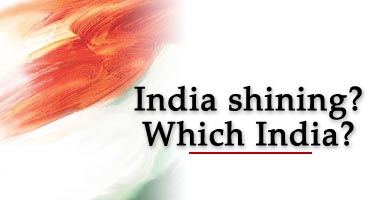 In earlier times, rulers used to build minars and monuments to celebrate their achievements. These days they take out ads, sometimes even before they have achieved anything, because they believe in the power of proclamation.

In this country of ours, once something is proclaimed, it's as good as done.

So how could the new government in Chhattisgarh be an exception?

Within days of being elected, even before it had time to digest the victory, it placed splashing ads, using taxpayers' money, to proclaim its wish: "Education for all, employment for all, happiness for all." Who could now say it's not a right-minded government? In the right Indian tradition, hasn't it done its duty?

But it's not Chhattisgarh I am worried about. That's in the future. I am more troubled by a new breed of ads that has suddenly been unleashed on us by none other than the Government of India, because they speak of the present.

"India Shining," these ads have begun to croon. "Times are exciting," they declare. "Villages are progressing. Eyes are twinkling. You've never had a better time to shine brighter."

Well, some India is certainly shining and some eyes are surely twinkling at the great opportunity to make extraordinary quantities of hay  --  the India where bribery has become a way of life, where criminals have invaded politics, scams have become the rule, honesty has disappeared from public life, and people like Satyendra Dubey have to get killed for exposing corruption  --  but these ads are about blood-and-sweat India and they can't be telling the truth.

The truth is, 433 million Indians, in a country of one billion people, still live in absolute poverty; some 400 million don't know how to read and write; 95 out of every 1,000 children born in this country die before the age of five; and more than a third of India's 200 million school-age children are not in school.

But let's not go into all that. Since much has been made of three specific developmental themes that are supposed to have influenced the results of the recent state elections  --  bijli (electricity), sadak (roadways) and pani (water supply)  --  let's look at our record in these three areas alone and check it out against China's, a country that's similar to ours in many ways.

Only then would one know what to make of those shining claims being so brashly peddled by the government's obviously very costly ad campaign.

Bijli: Half the Indian population still doesn't have electricity. Over 63 per cent of all rural households lack it. Even those who have it don't have it all the time.

Blackouts lasting 10 to 15 hours, or more, are common throughout the vast expanse of the Indian countryside, where most of our people live and struggle to survive. Against this, 97 per cent of all the 214.5 million households in China have electricity.

Sadak: Yes, India's road network is 3.2 million kilometres long, one of the world's largest. But over 95 per cent of this network is two-lane or narrower and much of it is in pathetic condition.

The rest of the network consists of urban roads, district roads and rural roads, which break up or disappear after every flood and monsoon.

About 40 per cent of India's 638,365 villages have no all-weather access to markets and social services.

Now look at China. Its current network is no more than 1.7 million km long, but 80 per cent of it consists of highways with a smooth, sealed surface.

And there are 20,000 km of four- to six-lane, access-controlled, super-fast expressways connecting major urban centres, on which even fully loaded trucks move at speeds of 80 to 100 km per hour.

In another two years, 99.5 per cent of China's towns and 93 per cent of its villages will have highway links.

Pani: India claims 89 per cent of its people have access to water.

What does it mean? Just one hand pump or standpipe for every 250 people and a water source within 1.6 km of a habitation.

But even under this punishing norm, do people get quality water all the year round?

Here's what the World Bank has to say: "Since the first Five-Year Plan (1952 to 57), $6.5 billion has been invested in India's rural water supply. However, many drinking water supply facilities are defunct due to poor maintenance and are not sustainable."

And here's what experts tell us: there's poison and all kinds of other pollutants in the water that large numbers of rural Indians drink and use, causing diseases, deformities and deaths.

But then, some people must stay in darkness for some others to show their shine.