A new Bengal, rising in Howrah

The Kolkata West International City -- the result of one of India's largest foreign direct investments deals in real estate -- is being built in Howrah, one of the four districts that voted in the second of the five-phase Assembly elections. 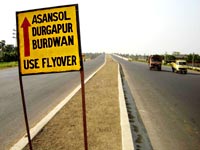 To get there, you just zip across the Hooghly through the Vidyasagar Setu -- built along the lines of the Golden Gate -- 12 km towards Burdwan. You avoid the industrial wasteland that most of present-day Howrah is, and see only the picture perfect roads built by the National Highway Authority of India.

All the satellite township has right now is an enormous gate with rearing horses atop, but by 2010 its will have bungalows, high rises, shopping malls, entertainment zones, information technology parks, a 13-acre club, a hospital and two schools.

Being built by two Indonesian groups, Salim and Ciputra, it is one of the Left Front government's mega answers to allegations of neglecting townships. After signing the deal in Jakarta, West Bengal Chief Minister Buddhadeb Bhattacharya called it 'the happiest day of my life.'

The 390 acres of land acquired for the township were taken over from people who had land there. Land that would give them crops, fish, livelihoods. 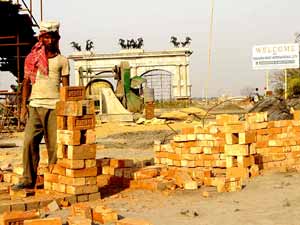 Like 42-year-old Mehboob Ali Haldar, a class VIII dropout from Bankra, Howrah, who used to run a poultry, a prawn farm, and two fish farms in his 18 bighas of land. He took training to develop his family business of fish.

Now, locked in a legal battle with the state for his land, he says he does not know what the future holds for him.

This is not the first time the land has been acquired by the government, "In 1984, we were served a Howrah Improvement Trust notice saying that the land would be used for a Kona satellite township," says H R Khan, a tax consultant who also lost his land to the project. The previous notice wanted all the land in Bankra -- agricultural as well as residential.

Then, 20 years later, the same HIT notice was sent back to the landholders, with a 'pro forma notice' tag stuck to it. The landowners were told to take their compensation -- calculated at about Rs 4,000 a katha -- within six months.

"Many of the notices were in the names of the old owners, which ignored the government's own records. Many notices were sent in the name of dead people, and the government also later added a clause that for collection of compensation above Rs 50,000, the block development officer's signature would required," says Khan.

"When the people went to the BDO, he said 'I am not bound to sign this,'" says Khan. "Many people have not got their compensation. These are poor people you are talking about, they don't know government procedure," he adds.

"It (the International City project) is de facto eviction of the poor and settlement of the rich," says Subhas Dutta, a Howrah resident and the man whose efforts resulted in the country's first 'green bench' for environmental issues at the Calcutta high court.

"This is not at all the development Howrah requires," he adds, pointing out that the district was once called the Sheffield of India, and there are about 34,000 small-scale industries which have been bleeding to death, ignored by the state government.

The state government does not deny the industrial decline of townships like Howrah, but says the economic policies of the Central government are responsible.

"The government has not taken up any package to revive the small scale industries, which have lost out to competition from states like Haryana and Punjab," says Dutta, a chartered accountant who has taken the state government to task on a number of issues, ranging from pollution to cleaning up Kolkata.

"Without accepting the discredit for destroying the township of Howrah, they (the state government) cannot accept credit for the new township," he adds.

He points out the compensation being given to the landowners is peanuts compared to the market rate for the same land, that Environmental Impact Assessments for the Left Front government's mega projects on the outskirts of Kolkata are "nothing but fait accompli" and that "the people of Howrah will not be benefited at all" by neither the International City project nor the motorcycle factory in the pipeline.

"The winning streak of the Left Front is not because of its success," he says, "it is because of the failure of the opposition."

The ruling Communist Party of India-Marxist is citing 291 per cent increase in investment in manufacturing industries. That would mean acquiring a lot of land.

A lot of land where there are millions of Mehboob Ali Haldars.